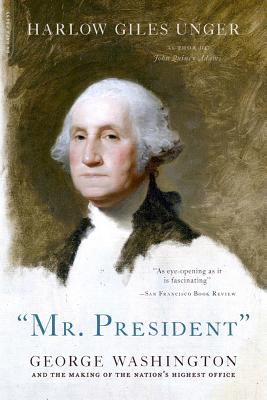 George Washington and the Making of the Nation's Highest Office

In this startling look at the birth of American government, award-winning author Harlow Giles Unger shows how George Washington transformed the presidency from a ceremonial post into the most powerful office on earth. Washington combined political cunning, daring, and sheer genius to seize ever-widening powers and impose law and order on the young nation while ensuring individual freedom for its citizens.

Praise For "MR. PRESIDENT": George Washington and the Making of the Nation's Highest Office…

“Unger gives our precious American history the backbone it deserves and reveals more of Washington the man than Washington the demigod.”—New York Journal of Books

“[A] thoroughly researched and delightfully written book.… A real thriller of a tale told with skill and authority.”—Washington Times

"Truly enlightening insight into the earliest days of the U.S. government.... As eye-opening as it is fascinating."—San Francisco Book Review

“Written with spirit and some subtlety, this work demonstrates that George Washington's contributions to the character of federal executive powers have been nearly as influential as his military leadership. Recommended to readers in early American and presidential history and U.S. political science.”

“A very good book…In his typically lucid and conversational style, Unger paints a never-before-seen portrait of Washington as a surprisingly beleaguered leader whose challenges in many ways echo those of the current occupier of the White House.”

“Unger [is] a leading historian of the revolutionary era.”