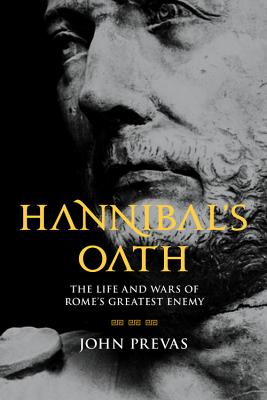 The Life and Wars of Rome's Greatest Enemy

According to the ancient sources, Hannibal was nine years old when his father led him to the temple at Carthage and dipped the young boy's hands in the blood of the sacrificial victim. Before those gods, Hannibal swore an oath of eternal hatred toward Rome.

Few images in history have managed to capture and hold the popular imagination quite like that of Hannibal, the fearless North African, perched on a monstrous elephant, leading his mercenaries over the Alps, and then, against all odds, descending the ice-covered peaks to challenge Rome in her own backyard for mastery of the ancient world. It was a bold move, and it established Hannibal as one of history's greatest commanders. But this same brilliant tactician is also one of history's most tragic figures; fate condemned him to win his battles but not his war against Rome.

An internationally recognized expert on Hannibal for nearly thirty years, historian John Prevas has visited every Hannibal-related site and mountain pass, from Tunisia to Italy, Spain to Turkey, seeking evidence to dispel the myths surrounding Hannibal's character and his wars.

Hannibal's Oath is an easily readable yet comprehensive biography of this iconic military leader--an epic account of a monumental and tragic life.

Praise For Hannibal's Oath: The Life and Wars of Rome's Greatest Enemy…

"Here, at last, is a biography worthy of one of history's most fascinating figures, whose crossing of the Alps with elephants to take on the mighty Roman Empire has captured imaginations for more than two thousand years. Written with a verve Hannibal would have admired, John Prevas's absorbing masterpiece will grip you from beginning to end."--Steve Forbes, bestselling author and editor-in-chief of Forbes magazine
—-

"Fascinating, authoritative, and an absolute joy to read, Hannibal's Oath is the definitive account of one of history's most enigmatic and important figures. A must for every lover of history, adventure, and unparalleled intrigue. No one brings history to life like John Prevas!"--Brad Thor, #1 New York Times bestselling author of Use of Force
—-

"Entertaining, fast, thought provoking reading...[A] balanced account...Covers much not discussed...in other books...This work benefits as much from its author as its history. Prevas intimately knows the battlefields, mountains, and rivers; he takes the reader on a sort of travelogue as well as telling a great immortal story."
—New York Journal of Books, -


"An exceptionally well researched, comprehensive, documented, and deftly written biography of an iconic military leader that reads with the inherently engaging appeal of a deftly crafted novel...Very highly recommended for both community and academic library biography collections."—Midwest Book Review, -

"An accessible account of the legendary general determined to topple a republic...A concise, readable biography of the fascinating general...This book has much to recommend it-succinctness, helpful photographs of the author's onsite reconnaissance, and a wise narrative instinct to abbreviate the latter half of Hannibal's time in Rome."
—Washington Independent Review of Books, -

"Prevas, a leading contemporary authority on Hannibal, has set out in this book to evoke the figure of Hannibal for the average reader with an interest in history, and in this he is largely successful...Gives adequate detail to really appreciate the stories, while still being approachable for a more general audience."
—Portland Book Review

John Prevas is a New York Times bestselling author whose first book, Hannibal Crosses the Alps, ignited the debate among academics over which pass Hannibal used -- a debate which continues today. He has been featured in a documentary about Hannibal filmed in the Alps by the BBC and has spoken on Hannibal as a leadership figure to United Nations ambassadors, the Smithsonian Institute, the Hoover Institute at Stanford University, the National Archaeological Museum in Athens, and at Forbes CEO conferences. Prevas has appeared on the History Channel, CNN, CNN International, NPR, C-Span's Book TV, and Fox Television.
Loading...
or
Not Currently Available for Direct Purchase