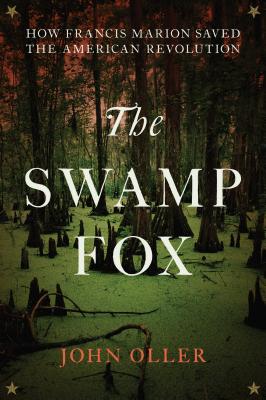 This comprehensive biography of Francis Marion, the Swamp Fox, covers his famous wartime stories as well as a private side of him that has rarely been explored
In the darkest days of the American Revolution, Francis Marion and his band of militia freedom fighters kept hope alive for the patriot cause during the critical British "southern campaign." Employing insurgent guerrilla tactics that became commonplace in later centuries, Marion and his brigade inflicted enemy losses that were individually small but cumulatively a large drain on British resources and morale.

Although many will remember the stirring adventures of the "Swamp Fox" from the Walt Disney television series of the late 1950s and the fictionalized Marion character played by Mel Gibson in the 2000 film The Patriot, the real Francis Marion bore little resemblance to either of those caricatures. But his exploits were no less heroic as he succeeded, against all odds, in repeatedly foiling the highly trained, better-equipped forces arrayed against him.

In this action-packed biography we meet many colorful characters from the Revolution: Banastre Tarleton, the British cavalry officer who relentlessly pursued Marion over twenty-six miles of swamp, only to call off the chase and declare (per legend) that "the Devil himself could not catch this damned old fox," giving Marion his famous nickname; Thomas Sumter, the bold but rash patriot militia leader whom Marion detested; Lord Cornwallis, the imperious British commander who ordered the hanging of rebels and the destruction of their plantations; "Light-Horse Harry" Lee, the urbane young Continental cavalryman who helped Marion topple critical British outposts in South Carolina; but most of all Francis Marion himself, "the Washington of the South," a man of ruthless determination yet humane character, motivated by what his peers called "the purest patriotism."

In The Swamp Fox, the first major biography of Marion in more than forty years, John Oller compiles striking evidence and brings together much recent learning to provide a fresh look both at Marion, the man, and how he helped save the American Revolution.

Praise For The Swamp Fox: How Francis Marion Saved the American Revolution…

Advance praise for The Swamp Fox

"Not only a new Francis Marion, but a new American Revolution emerges from these riveting pages. Best of all, John Oller has performed this feat with solid, totally convincing research. His is a book that every American will learn from-and enjoy."-Thomas Fleming, bestselling author of The Great Divide

"John Oller's thrilling narrative drops us into the steamy swamps of South Carolina as Francis Marion and his small militia repeatedly bloody larger, veteran redcoat armies, often serving as the only surviving patriot force between the British and the fall of the colony. The Swamp Fox paints a vivid portrait of the unassuming man who created a new, potent brand of guerrilla warfare, one that balanced audacity with tactical genius and resolute ethics. Oller's engaging work rightfully places Marion in the first ranks of great American heroes."-John F. Ross, author of War on the Run

"A tour de force-a scholarly presentation which has been long needed. Brilliantly written and documented."-Christine Swager, author of The Valiant Dead: The Battle of Eutaw Springs and Come to the Cowpens: The Story of the Battle of Cowpens


"Oller's exemplary knowledge about South Carolina's forgotten tussle during the revolution will engage readers...Highly recommended for military aficionados and students of Southern U.S. history or the American Revolution."--Library Journal


"A well-researched biography...Packed with fascinating tidbits for those who cannot get enough of military histories and/or accounts of the American Revolution."--InfoDad blog

"The Palmetto state is dotted with buildings, monuments, schools and historical sites in [Francis Marion's] honor. And now he also has the biography he deserves."--Houston Press

"Oller compiles striking evidence and brings together much recent learning to provide a fresh look both at Marion, the man, and how he helped save the American Revolution."--Idaho Statesman

"Oller has done an impressive job documenting the life and times of Francis Marion...Oller paints a picture of a humble man who believed in the sanctity of human life, who sought to minimize bloodshed when he could."--What Would the Founders Think?

"The story of a patriot and a military genius...A balanced portrait of a man whose contributions went beyond his military prowess...Oller's narrative style conveys the excitement of Marion's life as the 'Swamp Fox' and the excitement and horror of war. It also provides a clearly understandable description of troop movements and geography that enables the reader to understand the physical aspects of the story. Modern readers will recognize place names they see on summer trips to the beach."--Roanoke Times

"These days about all this generation knows about Francis Marion stems from the character played by Mel Gibson in The Patriot. John Oller sets the record straight...Whoever said that history had to be boring? The way Oller writes it, you won't be able to put it down."--Seattle Book Review


"In this action-packed biography we meet many colorful characters from the Revolution...Oller compiles striking evidence and brings together much recent learning to provide a fresh look both at Marion, the man, and how he helped save the American Revolution."--Readara


"The author takes a balanced approach to his subject, acknowledging Marion's military abilities and humanity in the often barbarous South Carolina civil war of 1780-1782, yet avoids lapsing into the hagiography that undermines many biographies...Oller does a fine job presenting Marion's activities within the larger context of the campaigns in the South, allowing readers to understand the overall military picture and Marion's place within it...[This] detailed and nuanced portrait of Francis Marion is capably done and will be welcomed by historians."--Journal of the American Revolution


"A detailed and well documented biography...[Oller] brings Francis Marion to life...This is a very detailed and informative book about this man, his life, and his importance in the success of the Revolutionary War...An enjoyable and readable history...It was an absolute pleasure to read and learn about so important an individual to this nations' freedom."--Portland Book Review

"An excellent book that describes the exploits of one of the saviors of the American Revolution in the South."--Collected Miscellany


"A genuinely new and insightful book about Marion...Tell[s] a good story in a well-written narrative...Goes right to core of what we most want to know about Marion...Oller puts real history behind the legend of Marion, giving us a detailed and engaging account of The Swamp Fox's military career. Beside the clear prose, the great strength of Oller's book is the solid research behind it...Oller is able to tell us more about Marion than any previous biographer. The picture we have is of a real man who was every bit as extraordinary as the legend, a master of partisan warfare and a true patriot who deserves a place alongside Washington in the pantheon of heroes of America's Revolutionary era."--Abbeville Institute


"May be the best Marion biography to come out in recent years. Oller's extensive research strips away the myths and legends of previous biographies in depicting a man of unquestionable character that became one of the fathers of modern guerrilla warfare."--Military Review


"A carefully researched account of the life of South Carolina militia general and guerilla leader Francis Marion, one of the American Revolution's most divisive and elusive figures. With an engaging narrative and a level of detail sure to delight many military historians and enthusiasts alike, Oller reconstructs Marion's participation in the Revolutionary War...A reconceptualization of Marion not as a mythological, virtuous American hero but as an astute student of war, one who understood the intricacies of waging a guerilla campaign against a superior force in a civilian community."--H-Net.org

"Oller brings precise research (and no little courage) to the challenge of writing a realistic, accurate life of a partisan leader whose exploits have made him a centerpiece of American national mythology...A virtue of John Oller's new biography is his extensive use of Francis Marion's orderly book and other papers to glean interesting details about his day-to-day activities and operations. Swamp Fox will certainly attract a wide readership, especially among students and history buffs."--Michigan War Studies Review

"Oller offers a thorough reassessment of Marion, placing his irregular tactics in the larger story of the Southern Campaign of 1780-1781...A welcome addition to the growing literature on the War of Independence in the South."
—The Historian

John Oller, a lawyer and journalist, is the author of the critically acclaimed biographies of actress Jean Arthur and Kate Chase Sprague, Mary Todd Lincoln's great rival. He lives in New York City.
Loading...
or
Not Currently Available for Direct Purchase