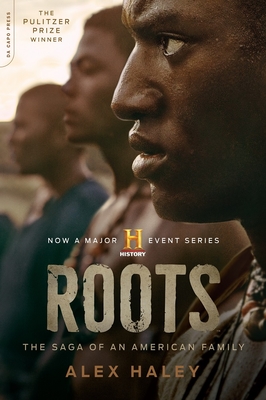 The Saga of an American Family

Based off of the bestselling author's family history, this novel tells the story of Kunta Kinte, who is sold into slavery in the United States where he and his descendants live through major historic events.

When Roots was first published forty years ago, the book electrified the nation: it received a Pulitzer Prize and was a #1 New York Times bestseller for 22 weeks. The celebrated miniseries that followed a year later was a coast-to-coast event-over 130 million Americans watched some or all of the broadcast. In the four decades since then, the story of the young African slave Kunta Kinte and his descendants has lost none of its power to enthrall and provoke.

Now, Roots once again bursts onto the national scene, and at a time when the race conversation has never been more charged. It is a book for the legions of earlier readers to revisit and for a new generation to discover.

To quote from the introduction by Michael Eric Dyson: "Alex Haley's Roots is unquestionably one of the nation's seminal texts. It affected events far beyond its pages and was a literary North Star.... Each generation must make up its own mind about how it will navigate the treacherous waters of our nation's racial sin. And each generation must overcome our social ills through greater knowledge and decisive action. Roots is a stirring reminder that we can achieve these goals only if we look history squarely in the face."


Praise For Roots: The Saga of an American Family…

"The book is an act of love, and it is this which makes it haunting."—New York Times

"A gripping mixture of urban confessional and political manifesto, it not only inspired a generation of black activists, but drove home the bitter realities of racism to a mainstream white liberal audience."—Observer

"A Pulitzer Prize-winning story about the family ancestry of author Alex Haley…[and] a symbolic chronicle of the odyssey of African Americans from the continent of Africa to a land not of their choosing."—Washington Post

Alex Haley (1921-1992) was a bestselling and award-winning writer whose works, including Roots and The Autobiography of Malcolm X, centered on the struggles of African Americans.
Loading...
or support indie stores by buying on