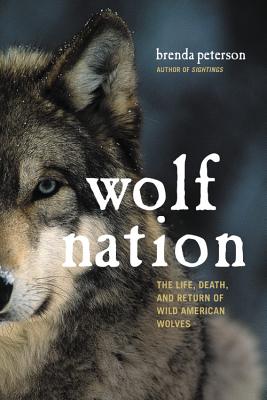 The Life, Death, and Return of Wild American Wolves (A Merloyd Lawrence Book)

In the tradition of Peter Matthiessen's Wildlife in America or Aldo Leopold, Brenda Peterson tells the 300-year history of wild wolves in America. It is also our own history, seen through our relationship with wolves. The earliest Americans revered them. Settlers zealously exterminated them. Now, scientists, writers, and ordinary citizens are fighting to bring them back to the wild. Peterson, an eloquent voice in the battle for twenty years, makes the powerful case that without wolves, not only will our whole ecology unravel, but we'll lose much of our national soul.

Brenda Peterson is the author of eighteen books, including the novel Duck and Cover, which was a New York Times Notable Book of the Year, and I Want to Be Left Behind, selected by the Christian Science Monitor among the Top Ten Best Non-Fiction Books of 2010. Her most recent work, Your Life Is a Book, was a monthly Oprah book club selection. Peterson's work has appeared in the New York Times, Chicago Tribune, San Francisco Chronicle, and she has contributed environmental commentary to Seattle NPR stations and on animal and environmental issues for the Huffington Post. She lives in Seattle on the shores of Salish Sea.

"A rich account of a most enigmatic creature."
—Library Journal

"In eloquent language, Peterson brings us to the truisms that not only does wilderness need wolves, but wolves must thrive to make the world whole again."
—Booklist

"Gripping and wonderfully lucid, this is both an entrancing and necessary read."—Manhattan Book Review

"[Wolf Nation] is a comprehensive look at these animals - their behavior and biology, why they howl and how they hunt, how alpha females can lead a family pack, and how their presence has improved every ecology to which they have returned."
—Cosmos

"The story of how wolves...came to reinhabit the American West is recounted in Brenda Peterson's instructive new book...[She] has ideal credentials to undertake such a project."—Wall Street Journal

"In Wolf Nation, Peterson adeptly captures the plight of wolves on this continent, stressing the importance of their return to prominence in nature."

"A riveting, heartwarming, and occasionally heartbreaking history of wolves in America."
—Chicago Review of Books

"Peterson broadens the existing wolf-behavior knowledge base through well-informed discussions of the pivotal effect that wolves have on wild ecosystems, the increasingly sophisticated study of wolf biology, and not only why wolves howl but what they might be saying."
—Santa Fe New Mexican