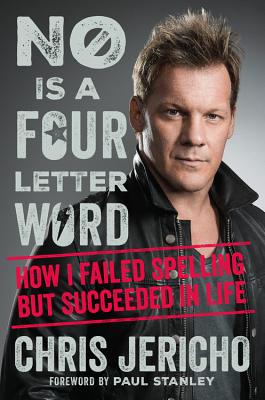 No Is a Four-Letter Word

How I Failed Spelling but Succeeded in Life

New York Times bestselling author and six-time WWE champion Chris Jericho shares 20 of his most valuable lessons for achieving your goals and living the life you want.

No Is a Four-Letter Word distills more than two decades of showbiz wisdom and advice into twenty easy-to-carry chapters, including:

Now, in the hopes that those same principles might help and inspire his legions of fans, Chris has decided to share them while recounting the fantastic and hilarious stories that led to the birth of these rules. The result is a fun, entertaining, practical, and inspiring book from the man with many scarves but only one drive: to be the best. After reading No Is a Four-Letter Word, you'll discover that you might have what it takes to succeed as well...you just need to get out there and do it. That's what Jericho would do.

Praise For No Is a Four-Letter Word: How I Failed Spelling but Succeeded in Life…

"Jericho's honesty, sense of humor and attention to detail make No Is A Four Letter Word another rousing success in the 'Books of Jericho.'"—Uproxx

"Great stories and inspirational talk about trying to live your life and get what you want out of it."—Red Carpet Crash

Chris Jericho is the author of three New York Times bestsellers, a six-time WWE World Heavyweight Champion, the lead singer of heavy metal band Fozzy, and the host of the Talk Is Jericho podcast. He lives in Tampa, Florida, with his wife and three children, hates thumbtacks, and is obsessed with lake monsters.
Loading...
or
Not Currently Available for Direct Purchase