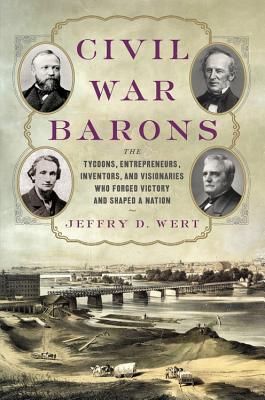 The Tycoons, Entrepreneurs, Inventors, and Visionaries Who Forged Victory and Shaped a Nation

Before the robber barons there were Civil War barons--a remarkable yet largely unknown group of men whose contributions won the war and shaped America's future.

The Civil War woke a sleeping giant in America, creating unprecedented industrial growth that not only supported the struggle but reshaped the nation.

Energized by the country's dormant potential and wealth of natural resources, individuals of vision, organizational talent, and capital took advantage of the opportunity that war provided. Their innovations sustained Union troops, affected military strategy and tactics, and made the killing fields even deadlier. Their ranks included men such as:

Robert Parrott, whose rifled cannon was deployed on countless battlefields.

Individually, these men came to dominate industry and amass great wealth and power; collectively, they helped save the Union and refashion the economic fabric of a nation.

Utilizing extensive research in manuscript collections, company records, and contemporary newspapers, historian Jeffry D. Wert casts a revealing light on the individuals most responsible for bringing the United States into the modern age.

Praise For Civil War Barons: The Tycoons, Entrepreneurs, Inventors, and Visionaries Who Forged Victory and Shaped a Nation…

"Jeffry Wert has brought his inimitable style and verve to the story of the key individuals who helped mobilize the resources through entrepreneurship, invention, and innovation necessary to win the Civil War for the Union."--Brian S. Wills, author of Inglorious Passages
—-

"Jeffry Wert has done all of us a great service. Civil War Barons conveys the story about those who helped forge our American Civil War. All of those profiled here had a profound impact not only on the war itself but our lives today. Civil War Barons illustrates why the war is relevant even after more than 150 years."--Wayne E. Motts, CEO of The National Civil War Museum
—-

"Civil War Barons will be long regarded as a must-read for historians and enthusiasts alike. Each chapter chronicles the genius and determination of a handful of individuals who changed forever the way wars were fought; saved the Union; and sparked the industrial might of twentieth-century America. To read Wert's book is to understand the war and its outcome like never before."--Keven Walker, CEO at Shenandoah Valley Battlefields Foundation
—-

"Diverse character studies that give a broad view of the sweeping economic revolutions of the era."
—Kirkus

Jeffry D. Wert is the award-winning author of nine previous books on Civil War topics, including Cavalryman of the Lost Cause and A Glorious Army. His articles and essays on the Civil War have appeared in many publications, including Civil War News, Civil War Times Illustrated, American History Illustrated, and Blue and Gray. A former history teacher at Penns Valley High School, he lives in Centre Hall, Pennsylvania.
Loading...
or support indie stores by buying on