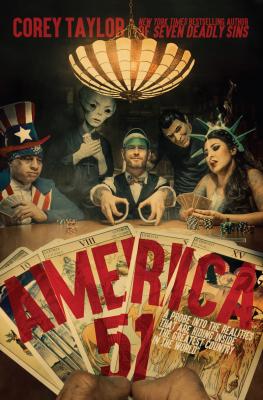 A skewering of the American underbelly by the New York Times bestselling author of Seven Deadly Sins, A Funny Thing Happened on the Way to Heaven, and You're Making Me Hate You

The always-outspoken hard rock vocalist Corey Taylor begins America 51 with a reflection on what his itinerant youth and frequent worldwide travels with his multiplatinum bands Slipknot and Stone Sour have taught him about what it means to be an American in an increasingly unstable world. He examines the way America sees itself, specifically with regard to the propaganda surrounding America's origins (like a heavy-metal Howard Zinn), while also celebrating the quirks and behavior that make a true-blue American. Taylor likewise takes a look at how the world views us, and his findings should come as a surprise to no one. But behind Taylor's ranting and raving is a thoughtful and intelligent consideration, and even a sadness, of what America is compared to what it could and should be.

Expertly balancing humor, outrage, and disbelief, Taylor examines the rotting core of America, evaluating everything from politics and race relations to modern family dynamics, millennials, and "man buns." No element of what constitutes America is safe from his adept and scathing eye. Continuing the wave of moral outrage begun in You're Making Me Hate You, Taylor flawlessly skewers contemporary America in his own signature style.

Corey Taylor is the New York Times bestselling author of Seven Deadly Sins, A Funny Thing Happened on the Way to Heaven, and You're Making Me Hate You. Lead singer of rock bands Slipknot and Stone Sour, Taylor has earned 11 Platinum records, 43 Gold records, and a Grammy. A native of Iowa, he spends his time between there, Las Vegas, and his suitcase.

Praise For America 51: A Probe into the Realities That Are Hiding Inside "The Greatest Country in the World"…

"With America 51, Taylor maintains his lazer-like focus on our cultural foibles...As someone who has clearly put a lot of time and effort into thinking about what it means to be an American in 2017, versus just clicking on clickbait and then ranting about it to his Facebook followers, he's earned the right to do so in a very public forum such as a book from a major publishing house."
—Blurt Online

"In his typical stream-of-consciousness style...the Slipknot frontman airs his gripes with all the political bullshittery that has gone down on his home turf recently...This is a takedown of modern-day politics and (of course) the Trump administration from a man who admits he feels no kinship to either big party, but has a wealth of knowledge on American politics and a comical yet vicious tongue to match...Corey shares his liberal views on everything from Black Lives Matter to Reaganomics, with cursing and caps lock firmly in place, forever reminding the reader that he's an asshole (his words!). And while not everyone will agree with the points made on these pages, this asshole knows his shit."
—Metal Hammer

"[Taylor] land[s] some highly-effective jabs...It's a work that's part-memoir, part-American history, part-social commentary, and much more besides. America 51's primary purpose is to get people thinking and, equally importantly, talking...This is a book with admirable intentions."
—Kerrang!

"With humorous stories, historical fact, and thought-provoking opinion [Taylor] impresses upon the reader the ideology behind the stunning election of Trump. The book is not a burdeonsome bitchfest from a guy who isn't happy with the outcome of the 2016 Presidential Election though. On the contrary, Taylor gives clear examples on how America is changing, politically, socially, morally, and responsibly. Racism, welfare, health care, jobs, religion, economy, Reagan, Obama, Hillary, Trump, Muslim ban, and many other issues important to America, or that should be important to America and Americans, are discussed....Taylor puts the spotlight on things that as citizens who love this country need to look at and find out how to fix, or change, or make better."
—MusicFrenzy.net

"[Taylor] spares no one and nothing: neither the rubes who think Trump is looking out for them nor the PC busybodies who whine about 'micro aggressions' as big corporations undermine everyone's macro."
—Milwaukee Shepherd Express

"[An] uncensored, no-holds-barred view of the political situation this country has been in, not just since the 2016 election circus, but since long before that. Though his disdain for Trump is quite prevalent throughout the entire book, Taylor doesn't stick to one side of the fence or the other; liberals, conservatives, republicans, democrats and hipsters are all up for grabs...America 51 will appeal to the masses no matter your political stance, race, class, gender or social views. Corey Taylor expresses the frustration we all share with what is going on in our country."
—Sonic Sound Magazine

"Taylor is reliably frank and profane throughout the text, his points are clear on a wide range of issues... Written in stream of consciousness style, Taylor expresses some surprisingly nuanced views about our country, jingoism and our role in the world...We are treated to a truly unique perspective on topics usually parsed by the same handful of wonks on the left and the right. In the world of political non-fiction, Taylor proves there's room on the shelf."
—Innocent Words

"One incredible strength the author channels into his writing is that of his voice. If you've ever listened to him talk at a show or in an interview, you know that he's a pretty entertaining and funny guy. This humor comes right through the page...His voice is that of a teacher, but also your best friend who loves to cuss...America 51 works like a spring board for further education; if you've ever wanted to become more invested in politics, or get a better understanding of where and how America started, the book presents ideas that you can further research...Out of his four books, America 51 is his most thought provoking read. He has some genuinely good and logical statements that are made, adding a sense of positivity where so many others rather appear nihilistic...It's a book that brings America's struggles into a brighter light, and asks us to please be aware."
—Metal Injection

"A double barreled shot at both political parties...Each chapter cuts to the heart of the matter, with funny and heartfelt anecdotes...America 51 is a truly enjoyable book from start to finish. The author offers a fresh take on our country's faults and strengths, while not holding back on the politicians and others who dwell on the divisiveness. This may not be easy reading for the hardcore conservative or liberal, but that may just be the point. It is a book with a tough message for the masses: look within."—Manhattan Book Review

"There could possibly be no better timing for the appearance of America 51, a tongue-in-cheek humor piece blending serious social observation and outrage with Corey Taylor's rant about the state of modern America and world perceptions of its culture...[An] engrossing and hard look at the state of modern America and those who live in this country."—Midwest Book Review
or support indie stores by buying on
Copyright © 2020 American Booksellers Association