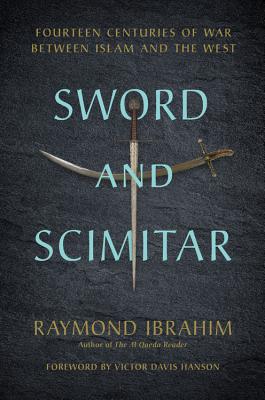 Fourteen Centuries of War between Islam and the West

A sweeping history of the often-violent conflict between Islam and the West, shedding a revealing light on current hostilities

The West and Islam -- the sword and scimitar -- have clashed since the mid-seventh century, when, according to Muslim tradition, the Roman emperor rejected Prophet Muhammad's order to abandon Christianity and convert to Islam, unleashing a centuries-long jihad on Christendom.

Sword and Scimitar chronicles the decisive battles that arose from this ages-old Islamic jihad, beginning with the first major Islamic attack on Christian land in 636, through the Muslim occupation of nearly three-quarters of Christendom which prompted the Crusades, followed by renewed Muslim conquests by Turks and Tatars, to the European colonization of the Muslim world in the 1800s, when Islam largely went on the retreat -- until its reemergence in recent times. Using original sources in Arabic and Greek, preeminent historian Raymond Ibrahim describes each battle in vivid detail and explains how these wars and the larger historical currents of the age reflect the cultural fault lines between Islam and the West.

The majority of these landmark battles -- including the battles of Yarmuk, Tours, Manzikert, the sieges at Constantinople and Vienna, and the crusades in Syria and Spain--are now forgotten or considered inconsequential. Yet today, as the West faces a resurgence of this enduring Islamic jihad, Sword and Scimitar provides the needed historical context to understand the current relationship between the West and the Islamic world -- and why the Islamic State is merely the latest chapter of an old history.

Raymond Ibrahim is a scholar of the Middle East and Islam and author of The Al Qaeda Reader and Crucified Again. He has contributed to the Los Angeles Times, Washington Post, Weekly Standard, and the Chronicle of Higher Education; appeared on C-SPAN, Al-Jazeera, CNN, NPR, and PBS; guest lectured at several universities, including the National Intelligence University; briefed governmental agencies such as US Strategic Command; and testified before Congress. Ibrahim has been a fellow at several think tanks, including the Hoover Institution, and has attended the Middle East Forum.

Praise For Sword and Scimitar: Fourteen Centuries of War between Islam and the West…

"Raymond Ibrahim's Sword and Scimitar is a much-needed history of landmark battles between Islam and the West, . . . [a] first-rate military history and a product of solid scholarship and philological research."--from the Foreword by Victor Davis Hanson, Martin and Illie Anderson Senior Fellow at the Hoover Institution

"With passion, Raymond Ibrahim offers an edgy and eye-opening introduction to a millennium of warfare between the Muslim and Christian worlds before the modern age."--Thomas Madden, award-winning author of Istanbul, Venice, and Concise History of the Crusades

"Raymond Ibrahim has the humility to take seriously the voices and opinions of history's Christians and Muslims; the result is a refreshingly honest account of Islamic expansion and Christian reaction that provides useful insights into today's problems. This is history as it should be done: allowing the past to inform and guide the present, rather than distorting the past to fit contemporary political ideologies."--Paul F. Crawford, Crusades historian, California University of Pennsylvania

"Raymond Ibrahim's Sword and Scimitar is a riveting military history of eight pivotal battles between the armies of Islamdom and Christendom. Ibrahim tells his story with extensive citations of primary sources which vividly bring to life the bloody fighting. Moreover, his method reveals the religious, political, and material motivations of the leading Christian and Muslim actors in this enduring conflict of visions that seem so very different from many modern western secular sensibilities."--James E. Lindsay, Professor of Middle East History, Colorado State University

"An accessible and well-researched examination of extremely important but often neglected cultural phenomena and historical events that have impacted several civilizations up to the present day."--Darío Fernández-Morera, Northwestern University, author of The Myth of the Andalusian Paradise: Muslims, Christians, and Jews under Islamic Rule in Medieval Spain

"Impressively informative, Sword and Scimitar is an exceptional work of outstanding scholarship that is so well written it reads more like a deftly crafted novel than a non-fiction history."—Midwest Book Review

"Enlightening for readers unfamiliar with the long history of war between these two faiths."—New York Journal of Books

"A riveting account of the major battles between Islam and the West."—Catholic World Report
or support indie stores by buying on
Copyright © 2020 American Booksellers Association