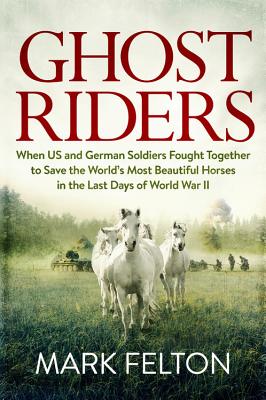 It is April 1945 and the world's most prized horses are about to be slaughtered...

As the Red Army closes in on the Third Reich, a German colonel sends an American intelligence officer an unusual report about a POW camp soon to be overrun by the Soviets. Locked up, the report says, are over a thousand horses, including the entire herd of white Lipizzaner's from Vienna's Spanish Riding School, as well as Europe's finest Arabian stallions--stolen to create an equine "master race." The horses are worth millions and, if the starving Red Army reaches the stables first, they will kill the horses for rations. The Americans, under the command of General George Patton, whose love of horses was legendary, decide to help the Germans save the majestic creatures.

So begins "Operation Cowboy," as GIs join forces with surrendered German soldiers and liberated prisoners of war to save the world's finest horses from fanatical SS soldiers and the ruthless Red Army in an extraordinary battle during the last few days of the war in Europe. This is an epic untold story from the waning days of World War II.

Drawing from newly unearthed archival material, family archives held by descendants of the participants, and interviews with many of the participants published throughout the years, Ghost Riders is the definitive account of this truly unprecedented and moving story of kindness and compassion at the close of humanity's darkest hour.

Mark Felton is a well-known British historian and the author of twenty books, including international bestsellers Zero Night, The Sea Devils, and Castle of the Eagles. Felton regularly contributes to periodicals and often appears as a historical expert on television specials for Discovery, History Channel, PBS, Quest, and American Heroes Channel. He lives in England.

Praise For Ghost Riders: When US and German Soldiers Fought Together to Save the World's Most Beautiful Horses in the Last Days of World War II…