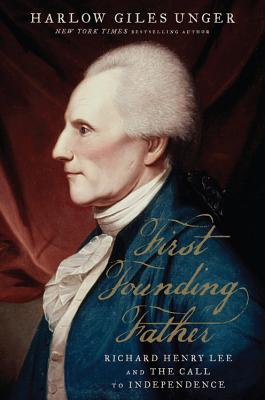 Richard Henry Lee and the Call to Independence

Before Washington, before Jefferson, before Franklin or John Adams, there was Lee--Richard Henry Lee, the First Founding Father

Richard Henry Lee was first to call for independence, first to call for union, and first to call for a bill of rights to protect Americans against government tyranny. A towering figure in America's Revolutionary War, Lee was as much the "father of our country" as George Washington, for it was Lee who secured the political and diplomatic victories that ensured Washington's military victories. Lee was critical in holding Congress together at a time when many members sought to surrender or flee the approach of British troops. Risking death on the gallows for defying British rule, Lee charged into battle himself to prevent British landings along the Virginia coast--despite losing most of his left hand in an explosion.

A stirring, action-packed biography, First Founding Father will startle most Americans with the revelation that many historians have ignored for more than two centuries: Richard Henry Lee, not Thomas Jefferson, was the author of America's original Declaration of Independence.

Praise For First Founding Father: Richard Henry Lee and the Call to Independence…

"In public awareness, Richard Henry Lee (1732-1794) has slipped into the cracks of historical anonymity; this book pulls him back into the light...A generous, well-documented account of the life of Lee, focusing on his varied roles in the birth of the United States...A sturdy, instructive biography of the 'first of the Founding Fathers to call for independence, first to call for union, and first to call for a bill of rights.'"—Kirkus Reviews

"[A] giant of the literature of American history...Harlow Giles Unger has crafted a portrait of Richard Henry Lee that not only allows the reader to get to know the man, but also offers a detailed look at society in 18th-century Virginia...Expertly crafted...Entertaining."—Roanoke Times

"While [Richard Henry] Lee's name may wander around somewhere in the back of our minds, this book, First Founding Father, will elevate him to the top of the list along with Washington, Franklin, [and] Jefferson...Unger paints a clear and detailed picture of Richard Henry Lee and his many contributions to the founding of the United States of America. For anyone who enjoys reading about American history, this book is most enjoyable, informative, and belongs on the library shelf."—New York Journal of Books

"One should always be skeptical when someone claims anyone was "first" at anything. However, Harlow Giles Unger makes a good argument that Richard Henry Lee came early to the ideas that triggered the American Revolution."—Milwaukee Shepherd Express

"Researched and indexed with scholarly accuracy, yet accessible to readers of all background, First Founding Father is highly recommended."—Midwest Book Review

"This wonderful man is brought to life in Unger's pages, which shine with appreciation and respect for a man who justly deserves them and deserves to be remembered as first among America's Founding greats."—San Francisco Book Review

"Richard Henry Lee was the first to call for independence and held the Continental Congress together during the conflict. This biography highlights his achievements."—Military Heritage

"Unger writes passionately and clearly describing the life of Lee and why he should not be forgotten as one our country's founding fathers."—Collected Miscellany

"Richard Henry Lee has not lacked for biographies, but none is as well executed as this one...[It] will inform both general readers and historians."—Choice Magazine