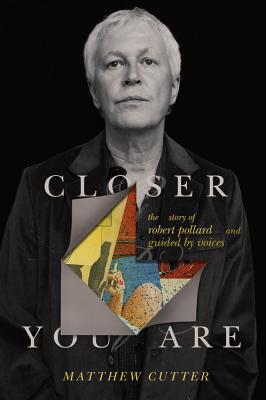 Closer You Are (Hardcover)

The Story of Robert Pollard and Guided By Voices

The authorized biography of Robert Pollard, indie rock icon and founder of the music group Guided By Voices

Robert Pollard has been a staple of the indie rock scene since the early '80s, along with his band Guided By Voices. Pollard was a longtime grade school teacher who toiled endlessly on his music, finding success only after adopting a do-it-yourself approach, relying on lo-fi home recordings for much of his and his band's career. A prolific artist, Pollard continues to churn out album after album, much to the acclaim of critics and his obsessive and devoted fans. But his story has never been faithfully told in its entirety. Until now.

Author Matthew Cutter is a longtime friend of Pollard and, with Pollard's blessing, he's set out to tell the whole, true story of Guided By Voices. Closer You Are is the first book to take an in-depth look at the man behind it all, with interviews conducted by the author with Pollard's friends, family, and bandmates, along with unfettered access to Pollard himself and his extensive archives.

Robert Pollard has had an amazing and seemingly endless career in rock music, but he's also established himself as a consummate artist who works on his own terms. Now fans can at long last learn the full story behind one of America's greatest living songwriters.

Matthew Cutter has published in MAGNET magazine and penned several award-winning game supplements for Deadlands: The Weird West. He wrote a licensed game adaptation of Eric Powell's Eisner Award-winning The Goon, and his short story "A Lonesome Place to Die" appears in The Cackler graphic novel. Cutter is also lead singer and lyricist for the bands Joseph Airport, Rectangle Creep, and Girls of the Big 10. He lives in Rockville, Maryland, with his wife and their three children.

Praise For Closer You Are: The Story of Robert Pollard and Guided By Voices…

"This authorized biography of Bob Pollard is a blast...[Cutter] has captured the raucous and squalling voice of a powerful American songwriter."—Publishers Weekly

"Essential for fans of GBV, lovers of '90 indies rock, and proud Ohioans."—Library Journal

"Essential reading for all fans of Guided By Voices, as well as anyone interested in the history of American indie rock."—Dangerous Minds

"Cutter's entertaining new biography of "Uncle Bob," Closer You Are, does an excellent job telling the story of the all-American-boy-turned-alternative-rock-god who's much more complex than his brash, boozy stage persona would indicate."—NPR

"Closer You Are does a great job in making the unlikely success story of an elementary school teacher who accidentally becomes the first lo-fi icon an engaging read, even for non-devotees."—PopMatters

"Closer You Are is a solid rock bio, and fans of GBV and indie rock will love it."-—Pittsburgh Post-Gazette

"A boisterous chronicle of one of indie rock's least probable but most luminous and unremitting stars."—Arts Fuse
or support indie stores by buying on
Copyright © 2020 American Booksellers Association