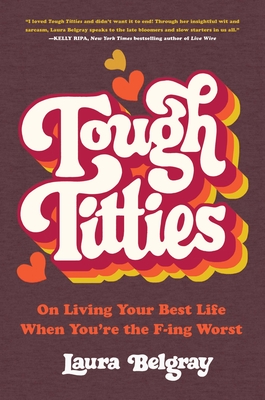 On Living Your Best Life When You're the F-ing Worst

From award-winning TV writer Laura Belgray, a hilarious collection of full-body-cringe, watch-through-your-fingers life lessons her own husband calls “loser Sex and the City.”

What does it take to grow up cool and popular, master adulthood, fast track your success, and always be your best? Laura Belgray wouldn’t know.

Her wildly relatable coming-of-age stories include hate-following her 6th grade bully on social media decades later; moving home post-college to measure her self-worth in hookups with Upper West Side bartenders; dating a sociopathic man-baby; proving herself in the early ‘90s at New York’s coolest magazine (as the world’s worst intern); falling for get-rich-quick schemes on the Internet; and, most of all, saying “tough titties” to the supposed-to’s in life: driving a car, being on time, handing in your paperwork, learning to roast a chicken, and having kids.

Peppered with cutting insights on our confusing, self-helpy culture that calls hair removal “self care” and tells us to give our 110% but also to give zero f*cks, Tough Titties will leave you feeling better about, well, everything. Let’s face it: we’re all tired of shame-spiraling after being told what to do when we know we’re not going to do any of it.

Tough Titties is one big permission slip to be a dork, a sometimes-unspiritual slacker, a late bloomer and, ultimately, 100% yourself. It’ll also have you snort-laughing in public and tapping whoever’s nearby to say, “Lemme read you one more part!” Which is annoying, but tough titties.

“Nobody makes me laugh like Laura Belgray. She’s got a one-of-a kind knack for taking the shame out of life’s most humiliating moments. Tough Titties is a hilarious, must-read permission slip to be 100% you.” — Marie Forleo, #1 New York Times bestselling author of Everything is Figureoutable

Laura Belgray is the founder of Talking Shrimp and co-creator of The Copy Cure with Marie Forleo. She has been featured in Fast Company, Money Magazine, Forbes, Vox, and Business Insider, and has written for Fandango, NBC, HBO, TBS, Nick at Nite, Nickelodeon, TV Land, FX, Nick Mom, VH1, TNT, Lifetime, Oxygen, the CW, and more. Belgray lives in New York.
Loading...
or support indie stores by buying on