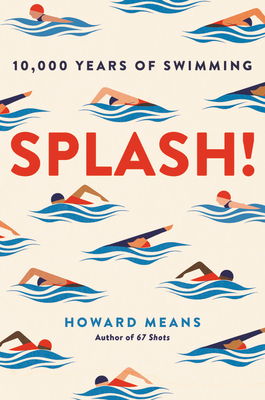 Choose a stroke and get paddling through the human history of swimming!
From man's first recorded dip into what's now the driest spot on earth to the splashing, sparkling pool party in your backyard, humans have been getting wet for 10,000 years. And for most of modern history, swimming has caused a ripple that touches us all--the heroes and the ordinary folk; the real and the mythic.
Splash! dives into Egypt, winds through ancient Greece and Rome, flows mostly underground through the Dark and Middle Ages (at least in Europe), and then reemerges in the wake of the Renaissance before taking its final lap at today's Olympic games. Along the way, it kicks away the idea that swimming is just about moving through water, about speed or great feats of aquatic endurance, and shows you how much more it can be. Its history offers a multi-tiered tour through religion, fashion, architecture, sanitation and public health, colonialism, segregation and integration, sexism, sexiness, guts, glory, and much, much more.
Unique and compelling, Splash! sweeps across the whole of humankind's swimming history--and just like jumping into a pool on a hot summer's day, it has fun along the way.

"What could be more audacious an act than the attempt to tell the entire 10,000-year story of swimming in a single volume? But that is exactly what Howard Means's Splash! aims to do. Splash! is an exuberant and sweeping cultural history of the sport and a thoughtful meditation on its possible origins and humankind's larger relationship to water itself. From the first evidence of swimming in Middle Eastern desert cave art to "aquatic heroism" in ancient Roman warfare, to a visit with the uber-stars and superhuman speeds of the 21st century--Means takes us on a breezy, easily readable journey across time and space to help us even to begin to understand why we took to the water in the first place and why we still insist on splashing about in it today. A great gift for the swimmer in you or in your life."—Julie Checkoway, New York Times bestselling authorof The Three-Year Swim Club

"Howard Means' Splash! has raised the bar for the 'swimoir'! He takes masterful strokes through 10,000 years of the cultural and social history of swimming and makes the strongest case yet written on why everyone should swim."—Bruce Wigo, former CEO & President, International Swimming Hall of Fame

"Splash! is an incredible book--the most amazing stories of anything and everything you wanted to know about the world and culture of swimming and its history. I loved every page!"—Rowdy Gaines, three-time Olympic Gold Medalist and Olympic television swimming analyst

"A nimble social history of humans at play in water... Devoted swimmers will want to splash about in this entertaining narrative."—Kirkus Reviews

"A thoughtful,... comprehensive, well-researched homage to swimming as a component of survival, leisure activity, and competitive sport"—Booklist

"Splash is a tour de force across the history of swimming... One of the better explanations of swimming I've ever read.... A joy to read. It should be on every swimmer's reading list and in every swim bag alongside cap, goggles, fins, and paddles."—SwimSwam Magazine

Howard Means is the author or co-author of ten books, most recently 67 Shots: Kent State and the End of American Innocence (Da Capo, 2016). Hailed by the Christian Science Monitor as "one of the most heartbreaking books in memory," 67 Shots is being developed as a feature length film by Everyman Pictures (Jay Roach) and Little Stranger Picture (Tina Fey & Jeff Richmond). Means' previous book, Johnny Appleseed: The Man, the Myth, the American Story (Simon & Schuster, 2011), was featured on NPR and in the weekend Wall Street Journal, and also optioned for TV and/or film.
Prior to turning full-time to book-length works, Means was senior editor at Washingtonian magazine, an op-ed columnist for King Features Syndicate, a daily journalist, and in the distant past, a schoolteacher. He began swimming competitively when he was five years old, continued through college, then coached for seven years. Swimming continues to define his life: Pools, rivers, lakes, quarries, oceans are his natural medium. Writing Splash! has been a labor of love.
Loading...
or support indie stores by buying on