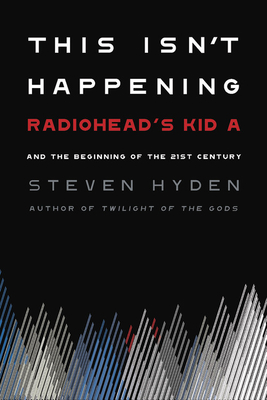 A Rolling Stone-Kirkus Best Music Book of 2020
"In this brilliant book, Steven Hyden goes deep into why Kid A matters—it's the fascinating saga of how the music turned into the symbol of a new cultural era." — Rolling Stone

THE MAKING AND MEANING OF RADIOHEAD'S GROUNDBREAKING, CONTROVERSIAL, EPOCHDEFINING ALBUM, KID A.

In 1999, as the end of an old century loomed, five musicians entered a recording studio in Paris without a deadline. Their band was widely recognized as the best and most forward-thinking in rock, a rarefied status granting them the time, money, and space to make a masterpiece. But Radiohead didn't want to make another rock record. Instead, they set out to create the future.

For more than a year, they battled writer's block, intra-band disagreements, and crippling self-doubt. In the end, however, they produced an album that was not only a complete departure from their prior guitar-based rock sound, it was the sound of a new era-and it embodied widespread changes catalyzed by emerging technologies just beginning to take hold of the culture. What they created was Kid A.

Upon its release in 2000, Radiohead's fourth album divided critics. Some called it an instant classic; others, such as the UK music magazine Melody Maker, deemed it "tubby, ostentatious, self-congratulatory... whiny old rubbish." But two decades later, Kid A sounds like nothing less than an overture for the chaos and confusion of the twenty-first century.

Acclaimed rock critic Steven Hyden digs deep into the songs, history, legacy, and mystique of Kid A, outlining the album's pervasive influence and impact on culture in time for its twentieth anniversary in 2020. Deploying a mix of criticism, journalism, and personal memoir, Hyden skillfully revisits this enigmatic, alluring LP and investigates the many ways in which Kid A shaped and foreshadowed our world.

Praise For This Isn't Happening: Radiohead's "Kid A" and the Beginning of the 21st Century…

Engadget, "The books, movies and music we’re gifting this year”

"This Isn't Happening not only is an excellent way to revisit Kid A but also a springboard for thinking about the shifting fortunes of rock music, the Internet, and the uneasy century we've been living in for the past 20 years."—Ezra Koenig of VampireWeekend

"If there was ever an album that deserves a book-length exegesis, it's Kid A, and there's no one better than Steven Hyden to unpack its mythologies and prophecies, and the extraordinary way it appeared to set the stage for the century that followed. This Isn't Happening is a smart, riveting, and dynamic history of a watershed moment for both music and the world."—Amanda Petrusich, author of Do Not Sell at Any Price: The Wild, Obsessive Hunt for the World'sRarest 78rpm Records

"Even if you've immersed yourself in Kid A thousands of times, Steven Hyden's passionately argued and kaleidoscopic This Isn't Happening will make you rethink and reimagine Radiohead's most audacious album and its place in cultural history--and history itself."—David Browne, author, Dream Brother: The Livesand Music of Jeff and Tim Buckley andCrosby, Stills, Nash and Young: The Wild, Definitive Saga of Rock's GreatestSupergroup

"Radiohead, music, and culture all stood at a crossroads in the year 2000. With insight and grace, Steven Hyden explores the ways in which the Kid A album pointed toward a future that no one could fully imagine--and captured a moment that, two decades later, we're still trying to comprehend."—Alan Light, author of The Holy or theBroken: Leonard Cohen, Jeff Buckley and the Unlikely Ascent of"Hallelujah" and host of "Debatable" on SiriusXM

"This Isn't Happening is beyond a mere analysis of Kid A. It is a vast and contextual examination of the world, both inside and outside of Radiohead, leading up to and flowing away from the creation of Kid A and its impact on both the band and culture as a whole. Connecting the record to film, politics, current events, and the cultural morass that comprised the final moments of the '90s, Steven Hyden gleefully and with meticulous absurdity dissects, deconstructs, and decodes the first great artistic enigma of the new millennium."—Alex Ross Perry,writer/director of Her Smell, Listen Up Philip, and TheColor Wheel

"[Hyden is] one of America's foremost rock critics."

"This Isn't Happening is a foundational text for understanding a difficult, prophetic album, and an addictive read for any fan of Radiohead."—Buzzfeed

"Hyden provides a thorough primer on the sound of Kid A...But Hyden truly excels at illuminating the context of Kid A, from the prerelease expectations to the oft-rapturous reviews to the music's ultimate legacy."—The Ringer

"With the conversational irreverence of the guy sitting down at the bar, Hyden draws connections to hybrid rock acts like Linkin Park, surreal and misanthropic blockbusters like Fight Club and Vanilla Sky, the internet's transformation from a utopian dream into a dystopian nightmare, and the tragedy on 9/11. For good measure (and fan service), he bookends This Isn't Happening's cultural insights with key Radiohead-related events occurring before and after the album."—Pitchfork

“Outstanding... an absolute masterclass in not only sharing [Steven Hyden’s] love for an album he obviously adores, and shows a deep respect for, but also a delve into their discography and the impact on his life.”—Critical Popcorn

"In this brilliant book, Steven Hyden goes deep into why Kid A matters—it's the fascinating saga of how the music turned into the symbol of a new cultural era."
(A Rolling Stone-Kirkus Best Music Book of 2020)
—Rolling Stone

"One of 2020’s finest and most enthralling reads... there are few folks writing about music with the intelligence, personality, and pop culture-savvy of Steven Hyden.”—The Film Stage

STEVEN HYDEN is the author of Twilight of the Gods, Your Favorite Band Is Killing Me, and (with Steve Gorman) Hard to Handle. His writing has appeared in the New York Times Magazine, Washington Post, Billboard, Pitchfork, Rolling Stone, Grantland, The A.V. Club, Slate, and Salon. He is currently the cultural critic at UPROXX. He lives in Minnesota with his wife and two children.
Loading...
or support indie stores by buying on