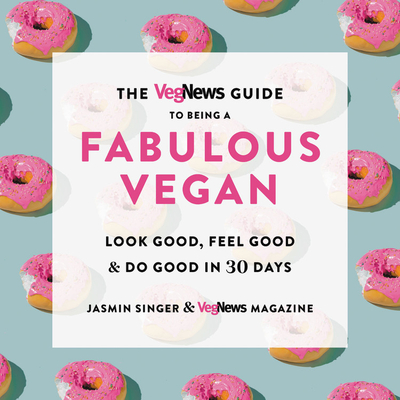 The VegNews Guide to Being a Fabulous Vegan (Paperback)

Want to be Fabulous?
Go Vegan!
Maybe you're interested in it for the food, maybe it's the animals, or maybe climate change has got you thinking. Whatever your reason, maybe you don't quite know where to start. After all, doesn't going vegan mean you have to give up tasty snacks, cool shoes, a sense of humor, and your leather couch? (Nope, nope, no way, well...eventually.) Covering everything from nutrition (you will get enough protein, promise) to dating (vegans have better sex. It's true) to fitness (you want to lift a car over your head? Sure), Jasmin Singer and the team at VegNews bust all the myths and give you all the facts about a plant-based lifestyle. With 30 easy recipes to get you started, The VegNews Guide to Being a Fabulous Vegan will help you adopt a lifestyle that's better for you, the animals, and the planet. And what's more fabulous than that?

VegNews Senior Editor Jasmin Singer is the author of the memoir Always Too Much and Never Enough. Jasmin was named by The Advocate Magazine as one of "40 Under 40 People to Teach Us About Each Other." In addition to her work with VegNews, Jasmin is the co-founder and co-host of the media nonprofit and weekly podcast, Our Hen House, which has been awarded several Webbys and has been touted as the "town hall for vegans" by the Today Show. Jasmin has appeared on The Dr. Oz Show, HuffPo Live, and can be seen in the documentaries Vegucated and The Ghosts in Our Machine. She has also been featured in media outlets such as CNN, Freakonomics, Women's Health, Metro NY, TimeOut NY, The Atlantic, and the New York Observer. She is a sought-after public speaker, and a Tedx presenter ("Compassion Unlocks Identity"). Jasmin splits her time between Los Angeles and New York City.

VegNews, the largest vegan media brand in the world, encompasses a flagship magazine, award-winning website, thriving social media community, wildly popular events, and even international vacations. Reaching nearly 4 million people each month through its various print and digital platforms, VegNews shares the very best in plant-based recipes, news, interviews, travel, beauty, fashion, and more. Since its launch in 2000, the beloved plant-based brand has won nearly every media industry award, and has been named "Magazine of the Year", "Magazine of the Decade," one of the "Top 20 Magazines in the Country," and "Best Media Company." The New York Times calls VegNews a glossy magazine that is a mix of People and Real Simple for the meatless set," and VegNews' co-founder and publisher Colleen Holland has been named one of the nation's "Top Women in Media." VegNews celebrates 20 years in 2020.
or support indie stores by buying on
Copyright © 2020 American Booksellers Association