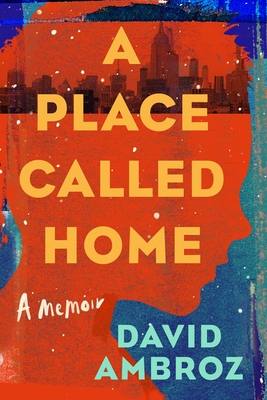 A galvanizing, stirring memoir about growing up homeless and in foster care and rising to become a leading advocate for child welfare, recognized by President Obama as an American Champion of Change.  “You will fall in love with David Ambroz, his beautifully-told, gut-wrenching story, and his great big heart.” (Jeanette Walls, author of The Glass Castle)

“It's impossible to read A Place Called Home and not want to redouble your efforts to fight the systems of poverty that have plagued America for far too long. In this book, David shares his deeply personal story and issues a rousing call to make this a more humane and compassionate nation.”—HILLARY RODHAM CLINTON

There are millions of homeless children in America today and in A Place Called Home, award-winning child welfare advocate David Ambroz writes about growing up homeless in New York for eleven years and his subsequent years in foster care, offering a window into what so many kids living in poverty experience every day.

When David and his siblings should be in elementary school, they are instead walking the streets seeking shelter while their mother is battling mental illness. They rest in train stations, 24-hour diners, anywhere that’s warm and dry; they bathe in public restrooms and steal food to quell their hunger. When David is placed in foster care, at first it feels like salvation but soon proves to be just as unsafe. He’s moved from home to home and, in all but one placement, he’s abused. His burgeoning homosexuality makes him an easy target for other’s cruelty.

David finds hope and opportunities in libraries, schools, and the occasional kind-hearted adult; he harnesses an inner grit to escape the all-too-familiar outcome for a kid like him. Through hard work and unwavering resolve, he is able to get a scholarship to Vassar College, his first significant step out of poverty. He later graduates from UCLA Law with a vision of using his degree to change the laws that affect children in poverty.

Told with lyricism and sparkling with warmth, A Place Called Home depicts childhood poverty and homelessness as it is experienced by so many young people who have been systematically overlooked and unprotected.  It’s at once a gripping personal account of deprivation—how one boy survived it, and ultimately thrived—and a resounding call for readers to move from empathy to action.

Praise For A Place Called Home: A Memoir…

“A Place Called Home will take your breath away. It’s a must read for anyone who’s looked at a raggedy street family and asked, ‘Who are those people?’ It’s also for everyone who cares about “Those People.” You will fall in love with David Ambroz, his beautifully-told, gut-wrenching story, and his great big heart.”—Jeannette Walls, New York Times bestselling author of The Glass Castle

"It's impossible to read A Place Called Home and not want to redouble your efforts to fight the systems of poverty that have plagued America for far too long. In this book, David shares his deeply personal story and issues a rousing call to make this a more humane and compassionate nation."—Hillary Rodham Clinton

“It’s a story of struggle against enormous odds and infinite random cruelties. But it is not a story without hope. . . . Ambroz has written a book about a child’s life in poverty, homelessness, and the screwed-up foster care system that isn’t depressing or overly didactic. He offers the reader plenty about how the system works — and how it doesn’t — in recounting the life and adventures of one remarkable boy.”—Washington Independent Review of Books

"This gut-wrenching and rousing memoir of a childhood lived on N.Y.C. streets sheds unforgiving light on America’s own human-rights crisis—and dares us to do better."

"A Place Called Home presents an unflinching, frank examination of the realities of being a child without a home and being surrounded by a fundamentally flawed system where neither child nor parent have enough help, or the right help, to break the cycle of poverty. Ambroz’s story is a frightening example of how easily inadequate procedures and policies traumatize lives each and every day. The heart of this first memoir is both a raw account of Ambroz’s journey to adulthood and a powerful, uncompromising call to action for significant change."

"Riveting. . . A haunting, inspiring chronicle of fortitude and perseverance."

“[A] captivating debut…Galvanizing and compassionate, this personal account of survival should be required reading.”—Publishers Weekly

“A Place Called Home asks us to reflect-on the family we come from and the family we find, the extraordinary courage of a child and the responsibility we all have to make the world safer for those who enter our world unprotected. In a society far too often consumed by division and dissonance, Ambroz writes to us at just the right time, lighting the way for a better world by asking us to give every child a chance.”—Steve Pemberton, author of A Chance in the World

“I love a true story where the downtrodden triumph over hardship—and A Place Called Home delivers. David Ambroz, through grit, courage, and integrity, overcomes obstacles beyond my imagination. I found myself cheering for him and the siblings he steadfastly protects, wondering how they were going to survive. David does more than that—he thrives—and then he pays it forward. A Place Called Home is an awe-inspiring story that will lift your spirits and soften even the hardest heart. It’s a beautifully told, captivating memoir.”—David Crow, author of The Pale-Faced Lie

“From his roller-coaster childhood being homeless on the streets of New York City to his boot-strapped entry to the privileged halls of the Ivy League, I was thoroughly entertained and even provoked by David Ambroz’s story.  More so than any book I have read in recent times, this must-read made me want to be better man.”—Dr. Alan Downs, author of The Velvet Rage

“I was deeply moved by his memoir, A Place Called Home, a soulful and ultimately uplifting tale of turning experience into power. This book tells the truths we need to hear and is a must-read for lovers of memoir and advocates alike; for those wondering what it is like to rise from poverty, and what an individual can do to fix the intractable problems we face.”—Los Angeles Mayor Eric Garcetti

"A heartbreaking, gritty, and inspiring personal testament to the burden that is placed on a child in poverty. David’s elegantly written memoir is an ode to the millions of families who are struggling to survive and provides the immense hope that is needed to.”
—Keith Ferrazzi, New York Times bestselling author of Competing in the New World of Work

“In A Place Called Home, Ambroz shares his personal journey out of a childhood marked by poverty, homelessness, and years in foster care – a story of courage, tenacity, and the power of education to transform lives.”
—Barbara Bush Foundation for Family Literacy

“David Ambroz faced seemingly insurmountable challenges his entire life and emerged with the grace and wisdom to tell the story. His dreams of a better life via education carried him through childhood abuse, homelessness, foster care, and finally to adulthood, where he leveraged his against-all-odds success to advocate for children living in poverty and foster care. This book is an inspiration to anyone who has encountered hardships, encouraging us to tackle them head-on with courage and determination.”
—Madeline Di Nonno, President & CEO of the Geena Davis Institute on Gender in Media

David Ambroz is a national poverty and child welfare expert and advocate. He was recognized by President Obama as an American Champion of Change. He currently serves as the Head of Community Engagement (West) for Amazon.  Previously  he led Corporate Social Responsibility for Walt Disney Television, and served as the President of the Los Angeles City Planning Commission, and as a California Child Welfare Councilmember. After growing  up homeless and then in foster care, he graduated from Vassar and later from UCLA School of Law (J.D.). He is a foster dad and lives in Los Angeles, CA.