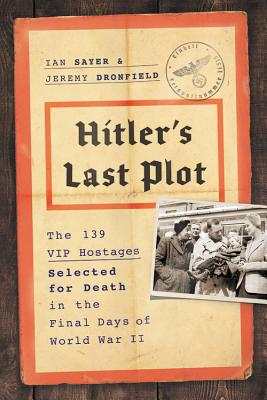 Revealed for the first time: how the SS rounded up the Nazis' most prominent prisoners to serve as human shields for Hitler in the last days of World War II

In April 1945, as Germany faced defeat, Hitler planned to round up the Third Reich's most valuable prisoners and send them to his "Alpine Fortress," where he and the SS would keep the hostages as they made a last stand against the Allies. The prisoners included European presidents, prime ministers, generals, British secret agents, and German anti-Nazi clerics, celebrities, and officers who had aided the July 1944 bomb plot against Hitler--and the prisoners' families. Orders were given to the SS: if the German military situation deteriorated, the prisoners were to be executed--all 139 of them.

So began a tense, deadly drama. As some prisoners plotted escape, others prepared for the inevitable, and their SS guards grew increasingly volatile, drunk, and trigger-happy as defeat loomed. As a dramatic confrontation between the SS and the Wehrmacht threatened the hostages caught in the middle, the US Army launched a frantic rescue bid to save the hostages before the axe fell.

Drawing on previously unpublished and overlooked sources, Hitler's Last Plot is the first full account of this astounding and shocking story, from the original round-up order to the prisoners' terrifying ordeal and ultimate rescue. Told in a thrilling, page-turning narrative, this is one of World War II's most fascinating episodes.

Praise For Hitler's Last Plot: The 139 VIP Hostages Selected for Death in the Final Days of World War II…

"This gripping account of one of the important but lesser-known aspects of the last days of the Second World War is packed with brand new information. Ian Sayer is a fine World War Two historian and the owner of the greatest private archive on the subject in Britain and has a long and enviable track record of discovering great historical scoops. Written with pace and verve, yet always true to the facts, this extraordinary story would make an amazing feature film."—Andrew Roberts, author of Churchill: Walking with Destiny

"Examine a little-known episode in the final days of Nazi Germany... [and] the story that unfolds is engaging."—Kirkus Reviews

"[A] story suspenseful and fearful."—New York Review of Books

"For any World War II buff, Hitler's Last Plot is a must-read. But anyone who enjoys a good old-fashioned adventure tale will love it, too."—Washington Independent Review of Books

Jeremy Dronfield is a biographer, historian, novelist, and ghostwriter, well-known for writing fast-paced, thrilling narratives. His most recent book, The Boy Who Followed His Father into Auschwitz, was a bestseller.

Ian Sayer is a military historian-detective whose investigation into "The World's Greatest Robbery" led to the 1984 publication of his international bestseller Nazi Gold. An acknowledged expert on the Third Reich, he has made regular appearances on television and radio.
Loading...
or
Not Currently Available for Direct Purchase