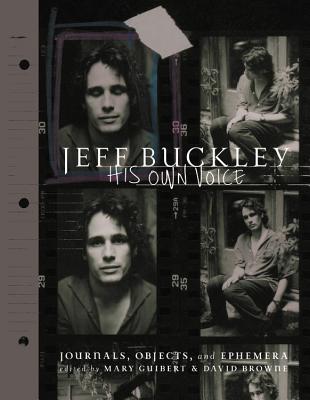 The journals, notebooks, musings, and early song drafts of Jeff Buckley, the late singer best-known for the definitive version of "Hallelujah" and his classic album Grace, including dozens of evocative photos of his personal effects and ephemera.
After the release of his acclaimed debut album, Grace, in 1994, Jeff Buckley quickly established himself as one of the decade's most defining talents in pop music: a singer, guitarist, and songwriter with a multi-octave range whose tastes took in rock, blues, jazz, hardcore, Qawwali music, and even show tunes. Hailed by the likes of Bono, Jimmy Page, and Robert Plant, Grace showcased Buckley's voice, passion, and influences and pointed to an inordinately promising future. Three short years later, at the age of thirty, he tragically drowned in Memphis. But his legend and stature have only grown since; in recent years, everyone from Adele to Coldplay to Radiohead has spoken of the impact Buckley's music had on them.
For much of his life, Buckley diligently kept journals recording his goals, inspirations, aspirations, and creative struggles. These diaries amount to one of the most insightful life chronicles any musical artist has left behind. Jeff Buckley: His Own Voice marks the first-ever publication of Buckley's handwritten account of his journey from his days in Los Angeles in the late '80s through shortly before his passing. Combined with reproductions of other memorabilia--including letters, notes, and unpublished lyrics--this book takes readers and fans deep into Buckley's mind and life.

Praise For Jeff Buckley: His Own Voice…

"Manages to summon the singular spirit of the late chanteur and songwriter. ... In His Own Voice, Buckley's humanity, humility and humor are always at the fore. ... Buckley's journals and letters reveal him to be just as fans hoped him to be: romantic, warm, funny, insightful, poetic and truly spectacular company."—People

"A self-portrait of an artist as a wide-eyed young man, it's inspiring to read and, thanks to Mary Guibert and David Browne, a privilege to hold in our hands."—Pop Matters

Mary Guibert is the executor of the Jeff Buckley Estate. In her role as curator of her son's music, she has compiled and produced a series of well-received releases, including Sketches for My Sweetheart the Drunk, MysteryWhite Boy, So Real: Songs of Jeff Buckley, and the acclaimed 2016 album You & I, and its 2019 follow up In Transition, part of a compelling collection of previously unheard 1993 sessions. She is based in Northern California.

David Browne is a senior writer at Rolling Stone and the author of Dream Brother, widely seen as the definitive biography of Jeff Buckley. He is also the author of Crosby, Stills, Nash and Young: The Wild, Definitive Saga of Rock'sGreatest Supergroup; Fire and Rain: The Beatles, Simon and Garfunkel, James Taylor, CSNY, and the Lost Story of 1970; and biographies of Sonic Youth and the Grateful Dead. His 1993 New York Times article, "The Unmade Star," was one of the first major stories published on Jeff Buckley. He lives in Manhattan.
Loading...
or support indie stores by buying on