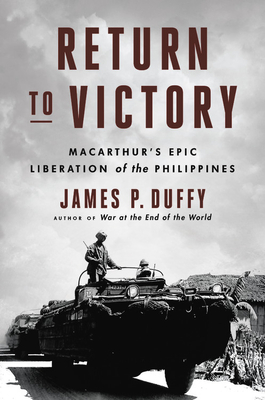 MacArthur's Epic Liberation of the Philippines

“I shall return,” General Douglas MacArthur promised the Filipino people following the Japanese invasion and occupation of the Philippines in spring 1942. The people there believed MacArthur’s vow—and even Americans were stirred by his dramatic pledge. Now, two and half years later, MacArthur was ready to fulfill his promise--the liberation of the Philippines was about to begin.

It would not be an easy campaign. The more than 7,000 islands of the Philippine archipelago were the key to taking down the Japanese Empire—and the Imperial forces were prepared to sacrifice every man and every ship to prevent MacArthur from regaining control of them.

Covering both the strategic and tactical aspects of the campaign through the participation of its soldiers, sailors, and airmen, as well as its commanders, James P. Duffy leads readers through a vivid account of the nearly year-long, bloody campaign to defeat over a quarter million die-hard Japanese defenders in the Pacific theater. Return to Victory is a wide-ranging, dramatic and stirring account of MacArthur’s epic liberation of the Philippines.

Praise For Return to Victory: MacArthur's Epic Liberation of the Philippines…

“General Douglas MacArthur’s return to the Philippines fulfilled the most prophetic promise of World War II and became an incomparable example of determined personal will backed by the unbounded power of America. Jim Duffy is an insightful historian and engaging writer who ably recounts this gargantuan effort, giving attention to overarching Pacific strategy as well as the harrowing exploits of those in the front ranks.”—Walter R. Borneman, author of The Admirals and MacArthur at War

“The suspenseful story in Return to Victory really is an epic tale. James Duffy brings us a remarkably clear account of one of the most complex military operations of all time, which included an amphibious landing that rivaled D-Day and the largest naval battle of the war. He adroitly combines fascinating details and a vivid depiction of the grand scope of the operation. This is a book that will appeal to World War II buffs and general readers alike.”—Jack Kelly, award-winning author of Valcour: The 1776 Campaign That Saved the Cause of Liberty

“James Duffy presents an authoritative, engaging panorama of the vicious air, land, and sea battles that defined General Douglas MacArthur’s hard-won effort to liberate the Philippines. A fine companion to the author’s War at the End of the World.”—Bruce Gamble, author of the Rabaul Trilogy

“With clarity and intelligence, James Duffy blends detail and a sweeping narrative to lead the reader from the invasion of Leyte and its harrowing naval battle to the Luzon landings and the battle for Manila; from describing the importance of logistics and air support to chronicling the dirty business of fighting diehards in the steamy mountain jungles. Meticulously researched, Return to Victory paints a panoramic picture of MacArthur’s dramatic return as conqueror."—Joseph Wheelan, author of Midnight in the Pacific and Bloody Okinawa

“With a narrative as driving as General MacArthur’s Pacific campaign, James Duffy provides an authoritative account of the bloody contest for the Philippines that led to the final defeat of the Japanese. Filled with crisp prose and infused with page-turning tension, Return to Victory is sure to thrill aficionados of World War II history.”—Theresa Kaminski, author of Angels of the Underground: The American Women Who Resisted the Japanese in the Philippines in World War II

“In Return to Victory James Duffy has brought the flamboyant Douglas MacArthur to life.  Duffy capably develops MacArthur as a master strategist and courageous commander in liberating the Philippines during World War II.”—Burton W. Folsom, Distinguished Fellow, Hillsdale College and coauthor of FDR Goes to War

"Duffy goes into immense and wonderful detail covering the commanders, sailors, and airmen, as well as the regular soldiers; covering the entirety of the campaign from both a tactical and strategic perspective. No matter where you are, Return to Victory will have you gripped to the page, even when you already know the outcome."

James P. Duffy is the author of over a dozen previous books, most on military history. His World War II titles include The Sinking of the Laconia and the U-Boat War, Target America, Hitler's Secret Pirate Fleet, and War at the End of the World. He has also written on the American Civil War and the rulers of Imperial Russia. He resides with his family in New Jersey.
Loading...
or support indie stores by buying on