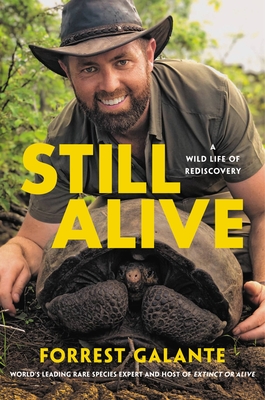 A Wild Life of Rediscovery

Experience the thrilling adventures in wildlife conservation from "the Indiana Jones of Biology" (Entrepreneur) in this action-packed and educational memoir filled with danger and intrigue.

Very few individuals can truthfully say that their work impacts every person on earth.  Forrest Galante is one of them. As a wildlife biologist and conservationist, Galante devotes his life to studying, rediscovering, and protecting our planet’s amazing lifeforms. Part memoir, part biological adventure, Still Alive celebrates the beauty and determined resiliency of our world, as well as the brave conservationists fighting to save it.

In his debut book, Galante takes readers on an exhilarating journey to the most remote and dangerous corners of the world. He recounts miraculous rediscoveries of species that were thought to be extinct and invites readers into his wild life: from his upbringing amidst civil unrest in Zimbabwe to his many globetrotting adventures, including suspenseful run-ins with drug cartels, witch doctors, and vengeful government officials.  He shares all of the life-threatening bites, fights, falls, and jungle illnesses. He also investigates the connection between wildlife mistreatment and human safety, particularly in relation to COVID-19.

Still Alive is much more than just a can’t-put-down adventure story bursting with man-eating crocodiles, long-forgotten species rediscovered, and near-death experiences. It is an impassioned, informative, and undeniably inspiring examination of the importance of wildlife conservation today and how every individual can make a difference.

Forrest Galante graduated in 2009 from UC Santa Barbara with a degree in biology. His hands-on approach to wildlife and passion for nature led to the development of his own television show, Extinct or Alive, on Animal Planet. The show follows Galante as he uses science to track and photograph animals that have wrongfully been deemed extinct. Since 2018, Galante has captured evidence of the existence of eight animals once lost to science. He continues to conduct field expeditions and surveys, working not just with believed-extinct animals but also with a wide range of other wildlife. His mission is to inspire and educate people about animals and adventure through the media, including hosting programs on Discovery Channel, on-camera expert interviews, and production of his own wildlife and natural history shows.
Loading...
or support indie stores by buying on
(This book is on backorder)