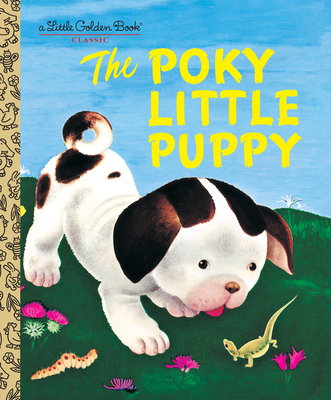 The bestselling picture book of all time!

Five little puppies dug a hole under the fence and went for a walk in the wide, wide world. . . .

The Poky Little Puppy was one of the original twelve Little Golden Books published in 1942, and went on to become the bestselling picture book of all time. The story of a curious puppy, who digs holes under fences and who has to go to bed without any strawberry shortcake, has delighted families for generations. it is, quite simply, an icon. Delightful to read aloud, The Poky Little Puppy is a cherished story that every child should know.

JANETTE SEBRING LOWREY (1892-1986), a Texan, wrote mostly teen fiction during the 1940s and 1950s. Her young adult novel Margaret was adapted into a TV serial, Walt Disney Presents: Annette, which aired on The Mickey Mouse Club in 1958, starring Annette Funicello. But Lowrey is best known as the author of The Poky Little Puppy, which was one of the original twelve Little Golden Books that launched in 1942. It went on to become an icon, and the bestselling picture book of all time.

GUSTAF TENGGREN (1896-1970) was a well-known illustrator in his native Sweden before immigrating to the United States in 1920. He illustrated many Golden Books, beginning with The Poky Little Puppy. One of the original twelve Little Golden Books published in 1942, The Poky Little Puppy went on to become the bestselling picture book of all time. Other iconic Little Golden Books illustrated by Tenggren include The Saggy Baggy Elephant, The Shy LIttle Kitten, and Tawny Scrawny Lion. In the late 1930s, Tenggren worked for the Disney Studio, providing concept artwork (created to inspire and guide animators)  for various characters and scenes in Bambi, The Old Mill, Snow White and the Seven Dwarfs, Pinocchio, and Fantasia.
Loading...
or support indie stores by buying on