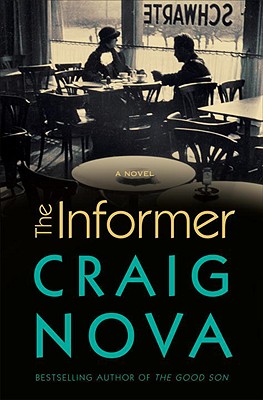 Berlin in 1930 is a city of dark paranoia and covert power struggles, where violence can erupt at any moment. The Brownshirts dominate the streets, but the Red Front is building its insurgence.

Gaelle, a beautiful but desperate young prostitute with a scar across one side of her face, trades in something far more powerful—and dangerous—than sex: information. To possess her, men will do more than pay—they will tell her secrets. What Gaelle wants is protection.

Felix, a sixteen-year-old boy with a lame foot, negotiates Gaelle’s price, accompanies her in limousines when she feels threatened, and reminds her to take care of herself. But can he really keep her from harm?

Armina Treffen is an investigator for the Berlin Police. Several women’s bodies have been found in the park, murdered in the same manner, and Armina, too, seeks Gaelle’s confidence to help her catch a serial killer.

Even as Gaelle tries to protect herself by possessing information, she becomes more entangled in a complex web of politics and murder in a city in which men will go to any length to maintain the power of silence.

In this taut literary thriller, acclaimed author Craig Nova masterfully captures the menace and malice of pre-war Berlin through the eyes of characters dealing with forces far beyond their control.

CRAIG NOVA is the author of ten novels and has received an Award in Literature from the American Academy of Arts and Letters. He is also the recipient of NEA and Guggenheim fellowships. His writing has appeared in "Esquire, Paris Review, New York Times Magazine, "and other publications.

Praise For The Informer…

"There are three elements in a Craig Nova novel that you can rely on.  First, there is the indelible atmosphere—in the case of THE INFORMER, this is Berlin in the 1930s, and the atmosphere is both brutal and mystifying, because everyone seems capable of betraying anyone.  The second element is that there are characters who know they’re in trouble, but they have underestimated how much trouble they’re in, and they are unsure in regard to which of the other characters they should fear most. The third and most important element is that these characters, and their entwined stories, are on a meticulously plotted collision course.  That there is a serial killer of prostitutes is not all that is threatening Gaelle; that Felix is Gaelle’s only friend does not necessarily make him trustworthy; that Armina, the homicide detective, wants Gaelle to trust her doesn’t mean that Armina will win Gaelle’s trust in time.  And there is nothing to say about the Ritter character, except that—in ruthless times—there are always these barely human chameleons who succeed in disguising themselves, who mete out an inadequate justice while managing to escape justice themselves. This is a dark but fantastic novel."
—John Irving

Praise for the Novels of Craig Nova


“Nova’s novels deserve to be ranked among the best American fiction of the past two decades. . . . The more he writes, the better he gets.”
—Washington Post

“An exquisitely delineated battle between father and son . . . The structure and language of this novel are almost without fault.”
—John Irving, New York Times Book Review

“[A] spine-chilling journey . . . moves with breakneck speed. Written with clarity and vivid detail, the book is troubling but poignant—burrowing into that shadowy, universal fear of uncertainty and malice. The book haunts, lingering in the mind long after the last page.”
—Baltimore Sun

"Made me hold my breath. It’s so intense, it blew me away. Sentence by sentence, the book is just fabulous."
—Ann Beattie

"Nova executes like a chess master, all the while ratcheting up the tension and calling into question any sense of security, order, or reason. Like the best of noir, Nova’s novels, serpentine in their structure, speed, and toxic bite, remind us that while dark forces are always present, we must embrace love."
—Booklist

"One of the country’s most gifted novelists."
—Chicago Tribune