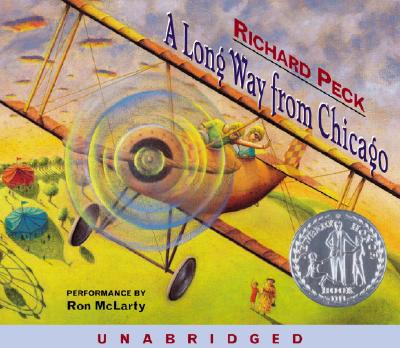 A Long Way from Chicago

August 1929: They see their first corpse, and he isn't resting easy.
August 1930: The Cowgilll boys terrorize the town, and Grandma fights back with a dead mouse and a bottle of milk.
August 1931: Joey and Mary Alice help Grandma to trespass, pinch property, poach, catch the sheriff in his underwear, and feed the hungry--all in one day.

And there's more--much more--as Joey and Mary Alice make seven summer trips to Grandma's, each one funnier and more surprising than the year before. In the grand storytelling tradition of American humorists from Mark Twain to Flannelly O'Connor, Richard Peck has created a memorable world filled with characters who, like Grandma herself, are larger than life and twice as entertaining. And year round, you are sure to enjoy your stay with them.

Born in Decatur, IIlinois, Richard Peck has written over 41 books for young readers. He is the winner of the 1990 Margaret A. Edwards Award, a prestigious award sponsored by the Young Adult Library Services Association of the American Library Association in cooperation with the School Library Journal; the 1990 National Council of Teachers of English/ALAN Award for outstanding contributions to young adult literature; and the Mystery Writers of America Edgar Allan Poe Award. In 2001 Mr. Peck was awarded the Newbery Medal for A Year Down Yonder.

Ron McLarty graduated from Rhode Island College in 1969, and started his theatre career shortly thereafter. A well known Broadway and TV actor, he is one of also the country’s leading audiobook narrators, having done over 100 titles, including the narration of books authored by Stephen King, Danielle Steel, Richard Russo, Elmore Leonard, Ed McBain, David Baldacci, Scott Turow, and George W. Bush’s memoir Decision Points. McLarty has also written his own books, among them the novels Traveler, The Memory of Running, and Art in America.
Loading...
or
Not Currently Available for Direct Purchase