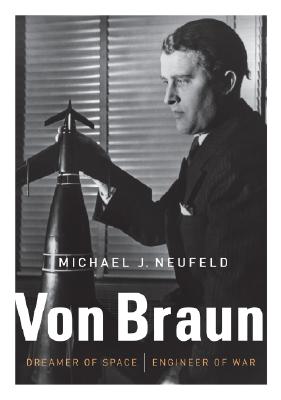 Dreamer of Space, Engineer of War

The first authoritative biography of Wernher von Braun, chief rocket engineer of the Third Reich—creator of the infamous V-2 rocket—who became one of the fathers of the U.S. space program. In this meticulously researched and vividly written life, Michael J. Neufeld gives us a man of profound moral complexities, glorified as a visionary and vilified as a war criminal, a man whose brilliance and charisma were coupled with an enormous and, some would say, blinding ambition.

As one of the leading developers of rocket technology for the German army, von Braun yielded to pressure to join the Nazi Party in 1937 and reluctantly became an SS officer in 1940. During the war, he supervised work on the V-2s, which were assembled by starving slave laborers in a secret underground plant and then fired against London and Antwerp. Thousands of prisoners died—a fact he well knew and kept silent about for as long as possible.

When the Allies overran Germany, von Braun and his team surrendered to the Americans. The U.S. Army immediately recognized his skills and brought him and his colleagues to America to work on the development of guided missiles, in a covert operation that became known as Project Paperclip. He helped launch the first American satellite in 1958 and headed NASA’s launch-vehicle development for the Apollo Moon landing.

Handsome and likable, von Braun dedicated himself to selling the American public on interplanetary travel and became a household name in the 1950s, appearing on Disney TV shows and writing for popular magazines. But he never fully escaped his past, and in later years he faced increasing questions as his wartime actions slowly came to light.

Based on new sources, Von Braun is a brilliantly nuanced portrait of a man caught between morality and progress, between his dreams of the heavens and the earthbound realities of his life.


Praise For Von Braun: Dreamer of Space, Engineer of War…

"A serious, important book that does justice to its subject's moral complexity and place in history. It details what happened and why during the race to the moon."
--M.G. Lord, Los Angeles Times Book Review

"Neufeld catches von Braun in one ethically supine moment after another."
--Thomas Mallon, The New Yorker

"Neufeld has a deep understanding of the technical and human challenges von Braun faced in leading the U.S. space program and lucidly explains his role in navigating the personal and public politics, management challenges and engineering problems that had to be solved before landing men on the moon."
--Publishers Weekly

"The defining work on a still-controversial figure."
--Kirkus

Michael J. Neufeld is chair of the Space History Division of the Smithsonian's National Air and Space Museum. Born and raised in Canada, he received his doctorate in history from The Johns Hopkins University in Baltimore. His second book, "The Rocket and the Reich: Peenemunde and the Coming of the Ballistic Missile Era," won the American Institute of Aeronautics and Astronautics History Manuscript Award and the Society for the History of Technology Dexter Prize. He lives in Takoma Park, Maryland.
Loading...
or
Not Currently Available for Direct Purchase