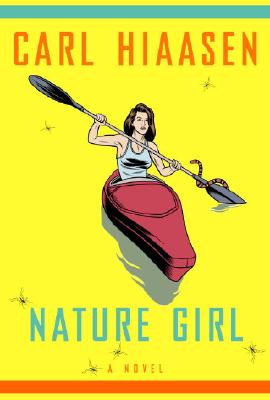 Honey Santana—impassioned, willful, possibly bipolar, self-proclaimed “queen of lost causes”—has a scheme to help rid the world of irresponsibility, indifference, and dinnertime sales calls. She’s taking rude, gullible Relentless, Inc., telemarketer Boyd Shreave and his less-than-enthusiastic mistress, Eugenie—the fifteen-minute-famous girlfriend of a tabloid murderer—into the wilderness of Florida’s Ten Thousand Islands for a gentle lesson in civility. What she doesn’t know is that she’s being followed by her Honey-obsessed former employer, Piejack (whose mismatched fingers are proof that sexual harassment in the workplace is a bad idea). And he doesn’t know he’s being followed by Honey’s still-smitten former drug-running ex-husband, Perry, and their wise-and-protective-way-beyond-his-years twelve-year-old-son, Fry. And when they all pull up on Dismal Key, they don’t know they’re intruding on Sammy Tigertail, a half white–half Seminole failed alligator wrestler, trying like hell to be a hermit despite the Florida State coed who’s dying to be his hostage . . .

Will Honey be able to make a mensch of a “greedhead”? Will Fry be able to protect her from Piejack—and herself? Will Sammy achieve his true Seminole self? Will Eugenie ever get to the beach? Will the Everglades survive the wild humans? All the answers are revealed in the delectably outrageous mayhem that propels this novel to its Hiaasen-of-the-highest-order climax.

“Hiaasen [is] king of the screwball comedies . . . Nobody escapes unscathed in this web of hilarious stories that intertwine and bisect each other like a nest of vipers . . . The charismatic, animated characters deliver lines that will bring tears of laughter to even the most jaundiced readers . . . This is top-notch storytelling by a truly original comic novelist.”
–Clayton Moore, Rocky Mountain News

“A big-hearted and deeply funny book . . . All of Carl Hiaasen’s obsessions are on full-tilt boogie.”
–Adam Woog, Seattle Times

“A whole lot ‘Survivor,’ a little bit ‘The Tempest,’ with a pinch of Laurel and Hardy . . . Hiaasen is always good for a number of laugh-aloud scenes and lines . . . His ear is pitch-perfect. The dialogue sings in Nature Girl.”
–Alan Michael Parker, Atlanta Journal-Constitution

“Hiaasen once again makes the case that life in his backyard really is more absurd than in ours . . . Nature Girl deserves the laughs it will get, from sea to shining sea.”
–Jane H. Furse, New York Daily News

“A breeze of a read, full of the usual Hiaasen whimsy.”
–Cary Darling, Fort Worth Star-Telegram

“Hiaasen’s arch potboilers, pitched in the low latitudes of Florida and the lower strata of human evolution, revolve around a few solid observations about the species: in a fallen world, damaged people will sometimes do noble things; and heels will always be heels. Hiaasen’s campfire voice, perpetually amused by the resourcefulness with which his characters reaffirm his opinion of human nature, provides a core of truthiness . . . [His] wasteland is as retributive as Cormac McCarthy’s, but funnier . . . Honey is a classic Woman in Jep, of the sort Hollywood seems to have abandoned . . . Hiaasen’s pacing is impeccable, and the scenes follow one another like Lay’s potato chips . . . I purred warmly through the novels’ twists and further twists . . . An entertaining ride.”
–John Leland, New York Times Book Review

“Hiaasen isn’t just Florida’s sharpest satirist–he’s one of the few funny writers left in the whole country . . . I think of him as a national treasure [and] I have yet to be disappointed. Nature Girl, Hiaasen’s latest, keeps his string going in fine fashion . . . Hiaasen is not just a good comic writer. He’s just a good writer.”
–Malcolm Jones, Newsweek

“Just sit back and watch as Carl Hiaasen, with his customary flourish, spins a glittering magic wheel and comes up with another set of characters only he could create . . . The book is an island romp.”
–Carolyn See, Washington Post Book World

“When he’s in good form, Hiaasen, like Elmore Leonard, shouldn’t be missed. Nature Girl is one of his better efforts . . . As usual, Hiaasen throws his colorful characters into an increasingly frenetic mix, and the fun lies in watching how, or if, they’ll manage to extricate themselves. One reason Nature Girl works so well is the fact that much of the action is confined to a single island, allowing the characters to intermingle and weave in and out of view.”
–David Lazarus, San Francisco Chronicle

“Winter reading needn’t be without comic hijinks . . . Nature Girl is a hilarious romp through the Everglades led by a bipolar divorced mom named Honey Santana, who cooks up a baroque plan to get back at a rude telephone solicitor.”
–Jonathan Miles, Men’s Journal

“As depicted by the deft pen of Carl Hiaasen, ecoterrorism is not only justified, it’s hilarious . . . He’s at it again in his distinctive, madcap style . . . [A] breakneck narrative.”
–Clea Simon, Boston Globe

“Zapped during dinner by a telemarketer peddling Florida ‘ranchettes,’ Honey Santana doesn’t just go postal, she devises a get-even scheme of demented brilliance . . . in the kind of Floridian follies on which Hiaasen owns the franchise . . . The writing is never less than amusing.”
–Pam Lambert, People

“Using his trademark dry, wry humor, Hiaasen shows how bad behavior tears the fabric of society . . . Nature Girl is typical Hiaasen, with a brisk story overflowing with satire, wisecracks and the fear of what society is becoming. The cast is one of his most accessible . . The main characters are as real as your next-door neighbors–with a few quirks . . . Highly entertaining.”
–Oline Cogdill, South Florida Sun-Sentinel

“Old fans and newcomers alike should delight in Hiaasen’s eleventh novel, another hilarious Florida romp [with an] engaging and diverse screwball cast . . . Hiaasen’s humorous touches and his all-too-human characters carry the book to its satisfying close.”
–Publishers Weekly