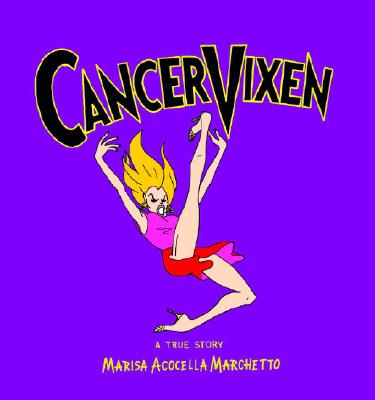 “What happens when a shoe-crazy, lipstick-obsessed, wine-swilling, pasta-slurping, fashion-fanatic, single-forever, about-to-get-married big-city girl cartoonist with a fabulous life finds . . . a lump in her breast?” That’s the question that sets this powerful, funny, and poignant graphic memoir in motion. In vivid color and with a taboo-breaking sense of humor, Marisa Acocella Marchetto tells the story of her eleven-month, ultimately triumphant bout with breast cancer—from diagnosis to cure, and every challenging step in between.

But Cancer Vixen is about more than surviving an illness. It is a portrait of one woman’s supercharged life in Manhattan, and a wonderful love story. Marisa, self-described “terminal bachelorette,” meets her Prince Charming in Silvano, owner of the chic downtown restaurant Da Silvano. Three weeks before their wedding, she receives her diagnosis. She wonders: How will he react to this news? How will my world change? Will I even survive? And . . . what about my hair?

From raucous New Yorker staff lunches and the star-studded crowd at Silvano’s restaurant to the rainbow pumps Marisa wears to chemotherapy, Cancer Vixen is a total original. Marisa’s wit and courage are an inspiration—she’s a cancer vixen, not its victim.

Marisa Acocella Marchetto lives in New York City and is a cartoonist for The New Yorker and Glamour. Her work has appeared in The New York Times and Modern Bride, among other publications. She is also the author of Just Who the Hell Is She, Anyway?
Loading...
or
Not Currently Available for Direct Purchase