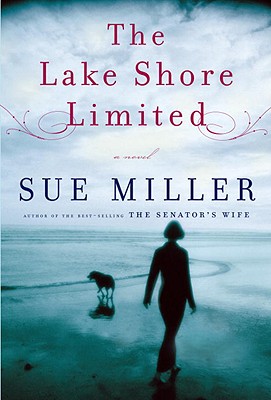 “A beautifully and bravely written novel about an accident beyond anyone's control and how four people atone and come to peace with it. At the core of the story is a play previewing in Boston that becomes central to the lives of the playwright, the play's lead actor, and two attendees with a family tie to the 9/11 tragedy. Vivid characters and their personal narratives flow in and out of this moving novel about the consequences of loss.”
— Carol Hicks, Bookshelf At Hooligan Rocks, Truckee, CA
View the List

Four unforgettable characters beckon you into this spellbinding new novel from Sue Miller, the author of 2008’s heralded best seller The Senator’s Wife. First among them is Wilhelmina—Billy—Gertz, small as a child, fiercely independent, powerfully committed to her work as a playwright. The story itself centers on The Lake Shore Limited—a play Billy has written about an imagined terrorist bombing of that train as it pulls into Union Station in Chicago, and about a man waiting to hear the fate of his estranged wife, who is traveling on it. Billy had waited in just such a way on 9/11 to hear whether her lover, Gus, was on one of the planes used in the attack.

The novel moves from the snow-filled woods of Vermont to the rainy brick sidewalks of Boston as the lives of the other characters intersect and interweave with Billy’s: Leslie, Gus’s sister, still driven by grief years after her brother’s death; Rafe, the actor who rises to greatness in a performance inspired by a night of incandescent lovemaking; and Sam, a man irresistibly drawn to Billy after he sees the play that so clearly displays the terrible conflicts and ambivalence of her situation.

How Billy has come to create the play out of these emotions, how it is then created anew on the stage, how the performance itself touches and changes the other characters’ lives—these form the thread that binds them all together and drives the novel compulsively forward.

A powerful love story; a mesmerizing tale of entanglements, connections, and inconsolable losses; a marvelous reflection on the meaning of grace and the uses of sorrow, in life and in art: The Lake Shore Limited is Sue Miller at her dazzling best.

Praise For The Lake Shore Limited…

“Ms. Miller not only conveys the subjectivity of all experience but also succeeds in creating a haunting chamber-music piece with many different solos. . . . Its power grows from Ms. Miller’s intimate understanding of her characters . . . and from her Chekhovian understanding of missed connections, lost opportunities, and closely held memories that mutate slowly over time. . . . Ms. Miller gives us a knowing meditation upon the acts of alchemy and theft that constitute an artist’s work: a meditation that sheds light on her own craft, so meticulously showcased in this novel.”
—Michiko Kakutani, The New York Times

“Miller’s exquisite new novel, The Lake Shore Limited, is so sophisticated and thoughtful that it should either help redeem the term ‘women’s literature’ or free her from it once and for all. . . . Gorgeously drawn and told with stark honesty. . . . Intellectual and emotional . . . profound and unsettling. . . . [A] miracle.”
—Ron Charles, The Washington Post

“Quintessential Miller, touching on the themes that have animated her fiction for the past quarter-century: the potency of sex; the failure of men and women to understand each other; the hunger for a different life.”
—Ligaya Mishan, The New York Times Book Review

“Miller has written gripping novels that shrewdly tap the domestic zeitgeist. Lake Shore, set between snowy Vermont and brick-lined Boston, continues the trend, exploring the fragility of love—and life—in the post-9/11 era. . . . [A] play-within-the-novel adds a layer of complexity to Miller’s latest tale, another graceful, poignant romance that resonates with the times.”
—Joanna Powell, People

“With the surety of a master, Miller reveals the intersection of love and fate.”
—Good Housekeeping

“An ensemble novel about love, loss, and the discontents of middle age.”
—Elle (Fiction pick of the month, The Elle’s Lettres Readers Prize)

“An ambitious exploration of the interaction between choice and random chance in human relationships. . . . Miller raises tantalizing questions about the ethics of love.”
—Kirkus Reviews

“Miller’s take on post-9/11 America is fascinating and perfectly balanced with her writerly meditations on the destructiveness of trauma and loss, and the creation and experience of art.”
—Publishers Weekly

“Expertly written, this novel plumbs the dark depths of grief and guilt but emerges into the light of self-forgiveness and freedom. Recommended.”
—Jyna Scheeren, Library Journal

“As the narrative among four different perspectives, Miller ever so slowly builds to a deeply affecting series of emotional revelations. Among the many heady themes Miller tackles—the joys and burdens of making art, the wish for a different, unencumbered life—is the relationships between men and women that elicit her most piercing insights and elegant turns of phrase. . . . An eloquent, layered meditation on the complexities of the human heart.”
—Joanne Wilkinson, Booklist

Sue Miller is the best-selling author of the novels "The Senator's Wife, Lost in the Forest, The World Below, While I Was Gone, The Distinguished Guest, For Love, Family Pictures, "and "The Good Mother;" the story collection "Inventing the Abbotts;" and the memoir "The Story of My Father." She lives in Boston, Massachusetts.
Loading...
or
Not Currently Available for Direct Purchase