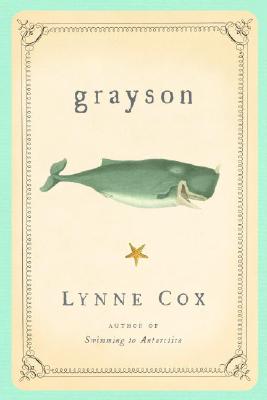 Grayson is Lynne Cox's first book since Swimming to Antarctica ("Riveting"--Sports Illustrated; "Pitch-perfect"--Outside). In it she tells the story of a miraculous ocean encounter that happened to her when she was seventeen and in training for a big swim (she had already swum the English Channel, twice, and the Catalina Channel). It was the dark of early morning; Lynne was in 55-degree water as smooth as black ice, two hundred yards offshore, outside the wave break. She was swimming her last half-mile back to the pier before heading home for breakfast when she became aware that something was swimming with her. The ocean was charged with energy as if a squall was moving in; thousands of baby anchovy darted through the water like lit sparklers, trying to evade something larger. Whatever it was, it felt large enough to be a white shark coursing beneath her body. It wasn't a shark. It became clear that it was a baby gray whale--following alongside Lynne for a mile or so. Lynne had been swimming for more than an hour; she needed to get out of the water to rest, but she realized that if she did, the young calf would follow her onto shore and die from collapsed lungs. The baby whale--eighteen feet long --was migrating on a three-month trek to its feeding grounds in the Bering Sea, an eight-thousand-mile journey. It would have to be carried on its mother's back for much of that distance, and was dependent on its mother's milk for food--baby whales drink up to fifty gallons of milk a day. If Lynne didn't find the mother whale, the baby would suffer from dehydration and starve to death. Something so enormous--the mother whale was fifty feet long--suddenly seemed very small in the vast Pacific Ocean. How could Lynne possibly find her? This is the story--part mystery, part magical tale--of what happened . . .

Lynne Cox was born in Boston, Massachusetts, and grew up in Los Alamitos, California, where she still lives. Her articles have appeard in The New Yorker and the Los Angeles Times Magazine, among other publications.

“An account of courage and adventure artfully rendered with the joy, wonder, and suspense it deserves.”–Boston Sunday Globe“Cox writes with grace and sensitivity. What an amazing woman.”–Sandy Bauers, The Philadelphia Inquirer“[An] endearing memoir and real-life fable.”–John Marshall, Seattle Post-Intelligencer“[A] moving, mystical memoir…”–People“Grayson is a beautifully made book . . . and as shimmering, colorful and thought-provoking as it is refreshing.”–Richard Irwin, Long Beach Press-Telegram“An extraordinary adventure artfully retold with all the joy, wonder, and suspense it deserves.”–Amanda Heller, The Boston Globe“Wonderfully sweet.”–Vogue “A riveting adventure celebrating the mysterious bond between a champion swimmer and one wayward calf.”–Elle “[Grayson] leads to a tear-wrenching conclusion that could only have been lived–and written–by a woman unafraid to challenge the unknown in nothing but her swimsuit.”–Bookpage “Lyrical . . . Mystical.”–Library Journal“Grayson would be compelling enough as a fable about a young woman and a lost whale. The fact that it’s true makes the story wondrous, and unforgettable.”—Carl Hiaasen“A story of remarkable simplicity and charm.  A young swimmer invites us into sea off the coast of California where through her eyes we see an entire realm of creatures we have never known so intimately before. Truly for people of all ages,  Lynne Cox’s adventure with the baby whale, Grayson, becomes a parable and an experience, thanks not only to the author’s great and generous spirit, but through her immense gift for describing nature.”—Anne Rice“Lynne Cox is a master of story telling: her prose captures the vast movements and deep mysteries of the ocean and the creatures for whom it is home. Everyone who reads Grayson will be enchanted and profoundly moved. Grayson is a powerful voice for conservation.”—Jane Goodall, Ph.D., DBEFounder — the Jane Goodall Institute & UN Messenger of Peacewww.janegoodall.org“A moving and memorable story, filled with dramatic tension and loving descriptions of the sea and all the wondrous creatures it holds. Grayson is a celebration of the natural world in all its glory, and the deep and lasting effect it can have on us humans if only we pause to notice.”—John Grogan, author of Marley & Me“A beautiful true story of interspecies communication where the human and the whale mind connected.”—Temple Grandin, author of Animals in Translation“The combination of retelling her once-in-a-lifetime experience with her observations on life will have timeless appeal for all ages.”—Publishers Weekly“Grayson is moving and thrilling in its simple language as Cox laments the inadequacy of words to express profound feelings but demonstrates the exhilaration of the effort.”—Booklist“An inspirational, almost spiritual read.”—Kirkus Reviews