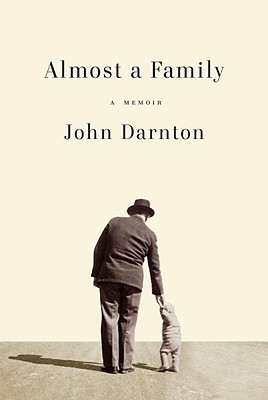 From the Pulitzer Prize–winning journalist and best-selling author: a beautifully crafted memoir of his lifelong chase after his father’s shadow.

John was eleven months old when his father, Barney Darnton—a war correspondent for The New York Times—was killed in World War II, but his absence left a more profound imprint on the family than any living father could have. John’s mother, a well-known Times reporter and editor, tried to keep alive the dream of raising her two sons in ideal surroundings. When that proved impossible, she collapsed emotionally and physically. But along the way she created such a powerful myth of the father-hero who gave his life for his family, country, and the fourth estate that John followed his footsteps into the same newsroom.

Decades after his father’s death, John and his brother, the historian Robert Darnton, began digging into the past to uncover the truth about their parents. To discover who the real-life Barney Darnton was—and in part who he himself is—John delves into turn-of-the-century farm life in Michigan, the anything-goes Jazz Age in Greenwich Village, the lives of hard-drinking war correspondents in the Pacific theater, and the fearful loneliness of the McCarthy years in Washington, D.C. He ends his quest on a beach in Papua New Guinea, where he learns about his father’s last moments from an aged villager who never forgot what he saw sixty-five years earlier.

Praise For Almost a Family: A Memoir…

Praise for ALMOST A FAMILY

“Written with elegance, rigor and nostalgia, John Darnton’s superb evocation of his father’s death as war correspondent in the Pacific and his influence on his life as a foreign correspondent will move and enchant.”
—Elie Wiesel, author of Night


“A brave, heartbreaking and inspiring story of a son’s search for the truth behind the myths he was reared with. It is proof that human beings can be scalded by life and yet come through strong, loving, talented and tough – and still know how to laugh.”
—Gay Talese, author of A Writer’s Life


“What a book! After 40 years of newspapering – winning prizes as a reporter and foreign correspondent – John Darnton has written a warm personal account of how it all came to be.”
—Ben Bradlee, author of A Good Life


“Here is that very rare species of American – the foreign correspondent – speaking from the heart. The result is exciting, magnetic, moving, and a damn good story.”
—Alan Furst, author of Spies of the Balkans


“Mesmerizing... One of America’s finest journalists embarks on a mission to separate truth from myth in the life and death of his father.  A brilliant memoir with surprising twists and turns.”
—Gene Roberts, author of The Race Beat


“A wrenching description of an anguished fatherless childhood…and yet, almost fatefully, the young man is destined for a life in the great game of reporting the news.”
—Morley Safer, author of Flashbacks


“Almost a Family is a deeply satisfying book, at once a memoir and the story of what is always a dangerous quest: the adult's search for the truths about his parents.”
—Michael Korda, author of Hero: The Life and Legend of Lawrence of Arabia


“I’ve read a lot of journalists’ memoirs and John Darnton’s Almost A Family is so far superior to all of them that it’s in a class by itself. He subtly weaves his own exploits as a New York Times reporter into the narrative of a quest to learn the truth about his war-correspondent father. His discoveries about the man behind the myth, and about his mother as well, stunned me almost as much as they did Darnton himself. As the title promises, this is really a story about the universal need for family. It’s written in a muscular, expressive prose that Darnton’s father would have been proud of, moves like a well-paced novel, and is altogether a terrific read.”
—Philip Caputo, author of A Rumor of War

John Darnton has worked for "The""New York Times" for forty years as a reporter, editor, and foreign correspondent. He is the recipient of two George Polk Awards and a Pulitzer Prize. He is also the author of five novels, including "The Darwin Conspiracy" and the best seller, "Neanderthal. "He lives in New York City.