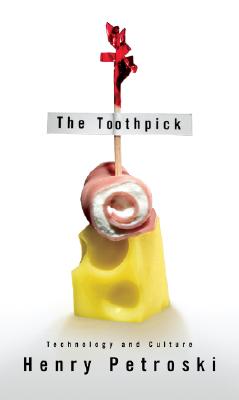 Like The Pencil, Henry Petroski’s The Toothpick is a celebration of a humble yet elegant device. As old as mankind and as universal as eating, this useful and ubiquitous tool finally gets its due in this wide-ranging and compulsively readable book. Here is the unexpected story of the simplest of implements—whether made of grass, gold, quill, or wood—a story of engineering and design, of culture and class, and a lesson in how to discover the extraordinary in the ordinary.

Petroski takes us back to ancient Rome, where the emperor Nero makes his entrance into a banquet hall with a silver toothpick in his mouth; and to a more recent time in Spain, where a young señorita uses the delicately pointed instrument to protect her virtue from someone trying to steal a kiss. He introduces us to Charles Forster, a nineteenth-century Bostonian and father of the American toothpick industry, who hires Harvard students to demand toothpicks in area restaurants—thereby making their availability in eating establishments as expected as condiments.

And Petroski takes us inside the surprisingly secretive toothpick-manufacturing industry, in which one small town’s factories can turn out 200 million wooden toothpicks a day using methods that, except for computer controls, haven’t changed much in almost 150 years. He also explores a treasure trove of the toothpick’s unintended uses and perils, from sandwiches to martinis and beyond.

With an engineer’s eye for detail and a poet’s flair for language, Petroski has earned his reputation as a writer who explains our world—from the tallest buildings to the lowliest toothpick—to us.


Praise For The Toothpick: Technology and Culture…

"I'll never look at a toothpick in the same way."
—Jeri Krentz, The Charlotte Observer

“Petroski writes . . . with the observant eye of an engineer and the imaginative heart of a novelist.”
—Los Angeles Times