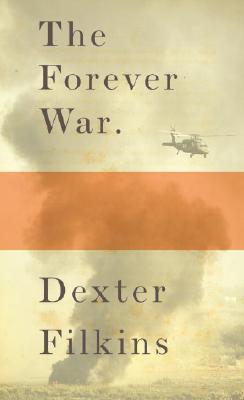 “The Forever War is a gut-wrenching and jaw-dropping look at our protracted war on terror. Touching on the most significant moments of the war, from the Afghan campaign up to the current rebuilding efforts in Iraq, Filkins provides a clear-eyed analysis of how both our optimism and our delusions may end up costing us far more than our nation can afford.”
— Matthew Norcross, McLean & Eakin Booksellers, Petoskey, MI
View the List

From the front lines of the battle against Islamic fundamentalism, a searing, unforgettable book that captures the human essence of the greatest conflict of our time.

Through the eyes of Dexter Filkins, the prizewinning New York Times correspondent whose work was hailed by David Halberstam as “reporting of the highest quality imaginable,” we witness the remarkable chain of events that began with the rise of the Taliban in the 1990s, continued with the attacks of 9/11, and moved on to the wars in Afghanistan and Iraq.

Filkins’s narrative moves across a vast and various landscape of amazing characters and astonishing scenes: deserts, mountains, and streets of carnage; a public amputation performed by Taliban; children frolicking in minefields; skies streaked white by the contrails of B-52s; a night’s sleep in the rubble of Ground Zero.

We embark on a foot patrol through the shadowy streets of Ramadi, venture into a torture chamber run by Saddam Hussein. We go into the homes of suicide bombers and into street-to-street fighting with a battalion of marines. We meet Iraqi insurgents, an American captain who loses a quarter of his men in eight days, and a young soldier from Georgia on a rooftop at midnight reminiscing about his girlfriend back home. A car bomb explodes, bullets fly, and a mother cradles her blinded son.

Like no other book, The Forever War allows us a visceral understanding of today’s battlefields and of the experiences of the people on the ground, warriors and innocents alike. It is a brilliant, fearless work, not just about America’s wars after 9/11, but ultimately about the nature of war itself.

Praise For The Forever War…

“Harrowingly detailed . . . Filkins makes us see, with almost hallucinogenic immediacy, the true human meaning and consequences of the ‘war on terror.’”
-The New York Times 10 Best Books of 2008

“The gaping wounds of Iraq and Afghanistan have produced a torrent of words, but no single volume so far has the precision and power of The Forever War . . . Filkins’ set pieces have the absolute clarity of lightning flashes that burn away the fog of war.”
-Time Best Nonfiction Books of 2008

“Not since Michael Herr in Dispatches . . . has a reporter written as vividly about combat as Filkins does from Afghanistan and Iraq.”
-USA Today 10 Best Books of 2008

“Dexter Filkins's The Forever War is the best piece of war journalism I've ever read. He paints a portrait of war that is so nuanced, so filled with absurdities and heartbreak and unexpected heroes and villains, that it makes most of what we see and hear about Iraq and Afghanistan seem shrill and two-dimensional by comparison. And yet, as tragic as the events he describes are, the book manages to be a thing of towering beauty.”
-Dave Eggers, Guardian Best Books of the Year

"The Forever War is already a classic–it has the timeless feel of all great war literature. Dexter Filkins’s combination of courage and sensitivity is so rare that books like his come along only once every major war. This one is ours."
-George Packer, author of The Assassins’ Gate: America in Iraq

“Dexter Filkins is the preeminent war correspondent of my generation, fearless, compassionate, and brutally honest. The Forever War is his astonishing story. It is one of the best books about war that I have ever read. It will stay with me forever.”
-Jeffrey Goldberg, author of Prisoners: A Muslim and a Jew Across the Middle East Divide

“Dexter Filkins has seen the rise of the Taliban in Afghanistan; he has stood in the ruins of the World Trade Center; he has been in the heat of battle in Iraq; indeed, no one else has been closer to the action than this courageous and thoughtful observer. This is a sensational book in the best sense.”
-Lawrence Wright, author of The Looming Tower: Al-Qaeda and the Road to 9/11

"Stunning...it is not facetious to speak of work like that of Dexter Filkins as defining the 'culture' of a war...This unforgettable narrative [represents]...a haunting spiritual witness that will make this volume a part of this awful war's history."
-Robert Stone, on the front page of The New York Times Book Review

“Extraordinary . . . if what Michael Herr brought back from Vietnam in Dispatches was a sort of Jackson Pollock–streaks of blood, trickles of dread, splattershot of hard rock and harder drugs–The Forever War is like a pointillist Seurat, a neo-Impressionist juxtaposition of spots of pure color with black holes and open wounds.”
-John Leonard, Harper’s

“The definitive–and heartbreakingly humanizing–report from the front lines in Iraq and Afghanistan . . . The Forever War [is] about all wars, everywhere–and a book that will be read fifty years from now.”
-Andrew Corsello, GQ

“Dexter Filkins is one of war writings’ modern marvels, a writer of tremendous gifts and appropriate grit to go where others will not.”
-Henry C. Jackson, Associated Press

“The best war reportage you are apt to read in a lifetime.”
-Joseph C. Goulden, The Washington Times

“Unflinching . . . Filkins confronts the absurdity of war head-on . . . This is a page-turner, and one of the most astounding books yet written about the war in Iraq . . . Filkins doesn’t lecture, he just reports, in great and perfect detail.”
-Gilbert Cruz, Time

“[Filkins is] an almost absurdly brave war correspondent . . . his brilliant, sad, unique book . . . may be the most readable book about Iraq. It’s certainly one of the most artful. . . We’re the better for it.”
-Hilary Frey, The New York Observer

“Brilliant . . . The Forever War . . . deserves to be ranked as a classic . . . and is likely to be regarded as the definitive account of how the wars in Afghanistan and Iraq were experienced by those who actually waged them . . . Thanks to one reporter’s heroic act of witness and brilliant recitation of what he saw, we can see the war–as it is, and for ourselves.”
-Tim Rutten, Los Angeles Times

“A kaleidoscope of images and intensity . . . It is written in finely honed bursts of vibrant color that capture the peculiar culture of the war . . . It is a raw and riveting account . . . his honesty in portraying the war implicitly exposes the hollowness of the platitudes used in Washington to defend it.”
-Chris Hedges, Philadelphia Inquirer

“Splendid . . . it shines as a work of literature, illuminating the human cost of war.”
-Bing West, The Washington Post

“Rich with details both grotesque and sublime . . . The Forever War is a masterpiece of nuance.”
-Matthew B. Stannard, The San Francisco Chronicle

“Gut-wrenching and touching . . .Mr. Filkins’s stories are those of a writer willing to endure hardship, danger and anguish to paint an accurate picture of war for the American public . . . His prose is as blunt as it is powerful.”
-Lee H. Hamilton, The New York Times

“Filkins . . . is a courageous reporter and an original writer . . . The narrative holds together through the power of his writing . . . The Forever War is an astonishingly good book.”
-Evan Wright, LA Weekly

“Addictive . . . [Filkins is] a master of the moment, of the concrete, of texture; where others try to explain, he wants you to know what being there feels like . . . I couldn’t put this book down.”
-Craig Seligman, Bloomberg

“Wonderfully written and carefully researched . . . Filkins’s meticulous attention to detail and his bravery . . . [are] evident on every page . . . The Forever War . . . serves as a powerful lesson in what it takes to cover the complexities of war . . . [Dexter Filkins] has put himself in the middle of this madness to deliver a stunning and illuminating story.”
-Chuck Leddy, Christian Science Monitor

“[Filkins is] the real deal, a reporter’s reporter . . . his brave and stunning new book . . . pulses with prose so lean–whipsawing between brutality and beauty–that it takes your breath away.”
-Paul Grondahl, Times Union

“A chilling and ethereal narrative of loss and the promise of loss.”
-Jim Chiavelli, The Boston Globe

“Phenomenal . . . The Forever War makes the war in Iraq so real, so haunting, that you’ll want to sleep with the book next to your bed and read it in every spare moment until the last page. It does what a great book about war, loss, politics, and sacrifice should–it moves, shocks, entertains, educates, and inspires. The Forever War is peerless–a classic.”
-Genvieve Long, The Epoch Times

Dexter Filkins, a foreign correspondent for "The New""York Times," has covered the wars in Afghanistan and Iraq since 2001. Before that, he worked for the "Los Angeles Times," where he was chief of the paper's New Delhi bureau, and for "The""Miami Herald." He has been a finalist for a Pulitzer Prize and a winner of a George Polk Award and two Overseas Press Club awards. Most recently, he was a fellow at the Carr Center for Human Rights Policy at Harvard University. He lives in Cambridge, Massachusetts.
Loading...
or
Not Currently Available for Direct Purchase