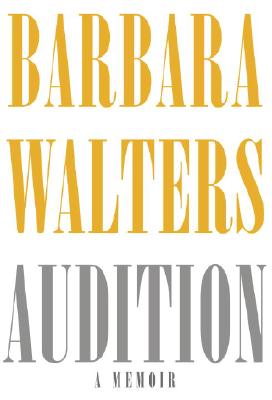 Young people starting out in television sometimes say to me: “I want to be you.” My stock reply is always: “Then you have to take the whole package.”

And now, at last, the most important woman in the history of television journalism gives us that “whole package,” in her inspiring and riveting memoir. After more than forty years of interviewing heads of state, world leaders, movie stars, criminals, murderers, inspirational figures, and celebrities of all kinds, Barbara Walters has turned her gift for examination onto herself to reveal the forces that shaped her extraordinary life.

Barbara Walters’s perception of the world was formed at a very early age. Her father, Lou Walters, was the owner and creative mind behind the legendary Latin Quarter nightclub, and it was his risk-taking lifestyle that gave Barbara her first taste of glamour. It also made her aware of the ups and downs, the insecurities, and even the tragedies that can occur when someone is willing to take great risks, for Lou Walters didn’t just make several fortunes—he also lost them. Barbara learned early about the damage that such an existence can do to relationships—between husband and wife as well as between parent and child. Through her roller-coaster ride of a childhood, Barbara had a close companion, her mentally challenged sister, Jackie. True, Jackie taught her younger sister much about patience and compassion, but Barbara also writes honestly about the resentment she often felt having a sister who was so “different” and the guilt that still haunts her.

All of this—the financial responsibility for her family, the fear, the love—played a large part in the choices she made as she grew up: the friendships she developed, the relationships she had, the marriages she tried to make work. Ultimately, thanks to her drive, combined with a decent amount of luck, she began a career in television. And what a career it has been! Against great odds, Barbara has made it to the top of a male-dominated industry. She was the first woman cohost of the Today show, the first female network news coanchor, the host and producer of countless top-rated Specials, the star of 20/20, and the creator and cohost of The View. She has not just interviewed the world’s most fascinating figures, she has become a part of their world. These are just a few of the names that play a key role in Barbara’s life, career, and book: Yasir Arafat, Warren Beatty, Menachem Begin, George H. W. Bush, George W. Bush, Jimmy Carter, Fidel Castro, Hugo Chávez, Bill and Hillary Clinton, Roy Cohn, the Dalai Lama, Princess Diana, Katharine Hepburn, King Hussein, Angelina Jolie, Henry Kissinger, Monica Lewinsky, Richard Nixon, Rosie O’Donnell, Christopher Reeve, Anwar Sadat, John Wayne . . . the list goes on and on.

Barbara Walters has spent a lifetime auditioning: for her bosses at the TV networks, for millions of viewers, for the most famous people in the world, and even for her own daughter, with whom she has had a difficult but ultimately quite wonderful and moving relationship. This book, in some ways, is her final audition, as she fully opens up both her private and public lives. In doing so, she has given us a story that is heartbreaking and honest, surprising and fun, sometimes startling, and always fascinating.


Praise For Audition: A Memoir…

“Audition is brutally honest, both about Walters and those she's worked with. Readers won't be left wondering what she thinks of anything, or anyone, for that matter. . . . It's a fascinating look at a woman who has lived a fascinating life.”
–Laura L. Hutchison, The Free Lance-Star

“[Walters’] heartfelt candor lifts this book above mere titillation. . . . blended with this personal drama is a delightful tale of the golden age of television . . . Through 50-plus chapters, you feel as though you’ve enjoyed a year of weekly lunches with Walters . . . She regales you with the juicy behind-the-scenes details of the celebrities she’s interviewed, mixed in with stories of her own trials and tribulations. In the end, you envy her a little less and admire her more.”
–Kathleen Matthews, Washington Post

“…the book is a triumph!”
—Caitlin Flanagan, The Atlantic

“…the grande dame of TV news has written a blockbuster. . . . Readers will gobble up the excerpts from scores of interviews with world leaders, politicians, celebrities and murderers.”
–Kathleen Daley, New York Sun

“an indispensable book along with a surefire monster best seller…intensely readable…She’s TV’s original monarch and superstar where power, show business and journalism converge. It’s Barbara Walters’ world, and the rest of us just live in it. [Her] mammoth memoir, doesn’t just touch chords, it’s a 600-plus page oratorio.”
–Jeff Simon, The Buffalo News

“an unusually ambitious and successful book. …suffused with an emotional intensity…it belongs to a part of American culture that Walters helped invent.”
–Nicholas Lemann, The New Yorker

“She doesn’t shy from the tough stuff… Nor does Walters, an entertainer as much as a ground-breaking journalist, skimp on the fun bits.”
–Allison Adato, People

“…compulsively readable… [Walters] gives us an entertaining panorama of a full life lived and recounted with humor and bracing honesty. Alternating between tales of her personal struggles, professional achievements and insider anecdotes about the celebrities and world leaders she's interviewed, this mammoth memoir's energy never flags.”
–Publishers Weekly (starred)

“A smart, funny, fascinating book in which Walters captures possibly her most elusive subject: herself.”
–Ilene Cooper, Booklist (starred)

Barbara Walters is the first woman ever to cohost a network news program. She is the recipient of numerous awards, including a Lifetime Achievement Award from the National Academy of Television Arts and Sciences. An ABC News correspondent, she is also host of "The Barbara Walters Specials" and the creator, cohost, and co-executive producer of ABC Daytime's "The View." She lives in New York City.
Loading...
or
Not Currently Available for Direct Purchase