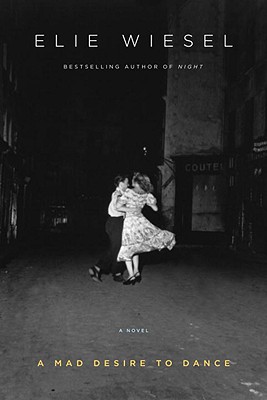 A Mad Desire to Dance

From Elie Wiesel, a recipient of the Nobel Peace Prize and one of our fiercest moral voices, a provocative and deeply thoughtful new novel about a life shaped by the worst horrors of the twentieth century and one man’s attempt to reclaim happiness.

Doriel, a European expatriate living in New York, suffers from a profound sense of desperation and loss. His mother, a member of the Resistance, survived World War II only to die in an accident, together with his father, soon after. Doriel was a child during the war, and his knowledge of the Holocaust is largely limited to what he finds in movies, newsreels, and books—but it is enough. Doriel’s parents and their secrets haunt him, leaving him filled with longing but unable to experience the most basic joys in life. He plunges into an intense study of Judaism, but instead of finding solace, he comes to believe that he is possessed by a dybbuk.

Surrounded by ghosts, spurred on by demons, Doriel finally turns to Dr. Thérèse Goldschmidt, a psychoanalyst who finds herself particularly intrigued by her patient. The two enter into an uneasy relationship based on exchange: of dreams, histories, and secrets. Despite Doriel’s initial resistance, Dr. Goldschmidt helps to bring him to a crossroads—and to a shocking denouement.

In Doriel’s journey into the darkest regions of the soul, Elie Wiesel has written one of his most profoundly moving works of fiction, grounded always by his unparalleled moral compass.

Praise For A Mad Desire to Dance…

Praise for A Mad Desire to Dance


“A soaring explanation of a soul devastated by horrorism in a world off its rocker, A Mad Desire to Dance cannot be called comfy, not by a long shot. But in its own highstepping yet paradoxically heart-wracking way, it can most assuredly be considered beautiful (almost beyond belief).”
-Judith Fitzgerald, The Philadelphia Inquirer

“Tales in A Mad Desire to Dance just pour out of the author like the Talmudic ma’ayan hamitgaber, the wellspring that never runs dry . . . Wiesel proves again that he is a master storyteller who can weave a complex tapestry of plots into an intricately poignant human portrait.”
-Ari L. Goldman, Moment magazine

“A Mad Desire to Dance is the novel Elie Wiesel was born–or more accurately, survived–to write . . . There are many truths buried in this book; that you have to work a little harder, dig a little deeper, to find them makes the experience all the more meaningful.”
-Curt Schleier, Milwaulkee-Wisconsin Journal Sentinel

“Elie Wiesel once more confirms his influence as a master storyteller who can weave an intricate narrative into a complex portrait of a man at once obliterated and remade.”
-M.E. Collins, Chicago Sun-Times

“Elie Wiesel continues to be the ultimate witness to history’s worst enormity, and its fiercest moral voice for remembrance . . . [A Mad Desire to Dance] takes patience and close reading, but those who stay with it will derive a significant level of satisfaction . . . from the seemingly simple yet stirring reminder that love can soothe, even if it cannot completely heal, the most horrendous wounds.”
-Gerald Sorin, Haaretz

“Alternately rough and tender . . . A Mad Desire to Dance begins ominously and ends beautifully . . . No matter if your faith lies with science, religion, or both, A Mad Desire to Dance offers a tantalizing conversion experience for the philosopher in you.”
-Andrew Burstein, The Baton Rouge Advocate

“Vivid . . . This novel is filled with gorgeous prose.”
-Kevin O’Kelly, The Boston Globe

“A Mad Desire to Dance shows the sensibility of a literary wanderer who has not finished searching for answers to his original anguished questions . . . A reader willing to navigate the thickets will find rewards. The novel’s . . . satisfactions lie in a sense of shared responsibility between teller and listener, a confidential yet far-reaching partnership that began four decades ago with Night.”
-Donna Rifkind, The Washington Post

“The novel . . . ends on an affirmative note, a triumph of life’s dance of desire over the madness that is a living death. Philosophy meets psychology in this profound, often poetic novel.”
-Starred review, Kirkus

“It is once again a survivor’s memories . . . that will rivet readers . . . The terse personal vignettes are gripping . . . The secrets surprise you to the end.”
-Booklist

“Difficult but powerful . . . Wiesel handles the situation expertly, and . . . a multilayered narrative emerges: the journey through sadness and toward redemption; a meditation on the hand dealt to Holocaust survivors; and a valuable parable on the wages of human trauma. While the novel is not always easy sledding, there are ample rewards–intellectual and visceral–for the willing reader.”
-Publishers Weekly

And praise from France for A Mad Desire to Dance

“A Mad Desire to Dance reminds us, with force, that Wiesel’s writing is alive and strong. The master has once again found here a startling freshness.”
-Le Monde des Livres

“A genuine adventure that enriches the reader.”
-L’Eclaireur

“A Mad Desire to Dance [is] an interior adventure driven by the need to know–and the certitude–that only love can heal our most intimate wounds.”
-France Culture

Elie Wiesel is the author of more than fifty books, both fiction and nonfiction, including his masterly memoir "Night." He has been awarded the United States Congressional Gold Medal, the Presidential Medal of Freedom, the rank of Grand-Croix in the French Legion of Honor, an honorary knighthood of the British Empire, and, in 1986, the Nobel Peace Prize. Since 1976, he has been the Andrew W. Mellon Professor in the Humanities at Boston University.
Loading...
or
Not Currently Available for Direct Purchase