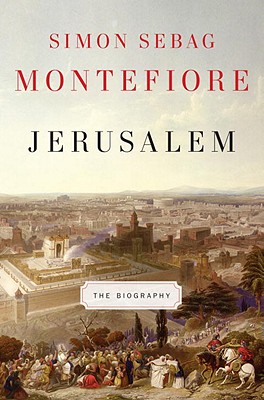 Jerusalem is the universal city, the capital of two peoples, the shrine of three faiths; it is the prize of empires, the site of Judgement Day and the battlefield of today’s clash of civilizations. From King David to Barack Obama, from the birth of Judaism, Christianity and Islam to the Israel-Palestine conflict, this is the epic history of three thousand years of faith, slaughter, fanaticism and coexistence.

How did this small, remote town become the Holy City, the “center of the world” and now the key to peace in the Middle East? In a gripping narrative, Simon Sebag Montefiore reveals this ever-changing city in its many incarnations, bringing every epoch and character blazingly to life. Jerusalem’s biography is told through the wars, love affairs and revelations of the men and women—kings, empresses, prophets, poets, saints, conquerors and whores—who created, destroyed, chronicled and believed in Jerusalem. As well as the many ordinary Jerusalemites who have left their mark on the city, its cast varies from Solomon, Saladin and Suleiman the Magnificent to Cleopatra, Caligula and Churchill; from Abraham to Jesus and Muhammad; from the ancient world of Jezebel, Nebuchadnezzar, Herod and Nero to the modern times of the Kaiser, Disraeli, Mark Twain, Lincoln, Rasputin, Lawrence of Arabia and Moshe Dayan.

Drawing on new archives, current scholarship, his own family papers and a lifetime’s study, Montefiore illuminates the essence of sanctity and mysticism, identity and empire in a unique chronicle of the city that many believe will be the setting for the Apocalypse. This is how Jerusalem became Jerusalem, and the only city that exists twice—in heaven and on earth.

Simon Sebag Montefiore read history at Cambridge University. His books have been published in more than thirty-five languages." Potemkin: Catherine the Great's Imperial Partner" was short-listed for the Samuel Johnson, Duff Cooper and Marsh Biography prizes in Britain. "Stalin: The Court of the Red Tsar" was awarded the History Book of the Year Prize at the British Book Awards. "Young Stalin "won the Los Angeles Times""Book Prize for Biography, the Costa Biography Award (U.K.), le Grand Prix de la biographie politique (France) and the Bruno Kreisky Prize for Political Literature (Austria). A Fellow of the Royal Society of Literature, Montefiore lives in London with his wife, the novelist Santa Montefiore, and their two children.

Praise For Jerusalem: The Biography…

“It's a wonderful book . . . [Montefiore] really tries to tell you what the life of the city has been like . . . why it means so much to everyone and why it’s so spectacular. You fall in love with the city and it breaks your heart that people can’t make peace over it, because it’s a treasure.”
—President Bill Clinton, #1 holiday book pick on the Today Show


“Magnificent . . . The city’s first ‘biography’—a panoptic narrative of its rulers and citizens, heroes and villains, harlots and saints . . . Montefiore barely misses a trick or a character in taking us through the city’s story with compelling, breathless tension.”
—Norman Lebrecht, Wall Street Journal

“Impossible to put down . . . A vastly enjoyable chronicle [with] many fascinating asides . . . Montefiore has a fine eye for the telling detail, and also a powerful feel for a good story.”
—Jonathan Rosen, New York Times Book Review

“This is a fittingly vast and dazzling portrait of Jerusalem, utterly compelling from start to finish.”
—Christopher Hart, Sunday Times (UK)

“Immensely readable . . . Montefiore is that rarest of things: a historian who writes great, weighty tomes that read like the best thrillers . . . He has a visceral understanding of what makes history worth reading.”
—Philip Kerr, Newsweek

“Ambitious and arresting . . . A powerful achievement, erudite without pedantry, and intimate with the complex archaeology of the city on the ground. In the matter of competing faiths, it is all but pitch-perfect . . . Jerusalem: The Biography is a double-headed book: at once a scholarly record and an exuberantly written popular tour de force.”
—Colin Thubron, New York Review of Books

“Sweeping and absorbing . . . Montefiore is a master of colorful and telling details and anecdotes . . . His account is admirably dispassionate and balanced.”
—Jackson Diehl, Washington Post Book World

“Magisterial . . . As a writer, Montefiore has an elegant turn of phrase and an unerring ear for the anecdote that will cut to the heart of a story . . . It is this kind of detail that makes Jerusalem a particular joy to read.”
—The Economist

“Simon Sebag Montefiore’s magnificent biography of Jerusalem has all the grandeur and sweep of her 3,000-year history. His masterful research and his gift for bringing it all to life make this fascinating work a treasure-trove for scholars and laymen alike.”
—Henry Kissinger

“In his stunningly comprehensive history, Simon Sebag Montefiore covers 3,000-plus years of the Earth’s most fiercely contested piece of geography . . . Not only has Montefiore delivered a piece of superb scholarship, he has done so in an extremely easy-to-read style. The author tells the history of the complex relationships that existed between long-dead peoples in a manner that makes them seem human and understandable.”
—Imre Lake, Newark Star-Ledger

“A Meisterwerk . . . As one becomes gripped by the rich, pungent detail of the lives of Jerusalem’s rulers and the ruled, it becomes clear why this work was conceived as a biography. It provides a perfect, almost providentially designed, opportunity for one of our greatest biographers to display every one of his skills. Montefiore has a novelist’s eye, a great journalist’s nose and a great historian’s touch . . . He manages to construct a history that no fair-minded reader can conclude is anything other than judicious, nuanced, balanced, and sensitive . . . When history is written this way one can never have too much.”
—Michael Gove, Times (UK)

“Already a classic—a gripping and thought-provoking study of the city whose modern religious, political and ethnic rivalries can be understood only in the context of its preceding 3,000 years of history. Montefiore writes with verve, sensitivity and a keen eye for the entertaining historical detail.”
—Financial Times

“A masterly, vastly entertaining, and timely book . . . Montefiore succeeds because of the power of his storytelling. [He] has an unerring eye for the vivid detail to illustrate his point and the telling quote to place it in context . . . Some fascinating sources are entirely new to English readers . . . This is a compelling narrative and an important book.”
—Victor Sebestyen, Evening Standard

“An astoundingly ambitious, triumphantly epic history of the city . . . Montefiore’s achievement, in fashioning a fluent narrative out of such daunting material, can hardly be praised enough . . . A marvellous book.”
—Tom Holland, The Sunday Telegraph

“An outstanding work . . . Anyone who has a role to play [in the future of Jerusalem] would do well to read this superbly objective, elegantly written, and highly entertaining book.”
—Saul David, Mail on Sunday

“This is an essential book for those who wish to understand a city that remains a nexus of world affairs . . . Although his Jewish family has strong links to the city, Montefiore scrupulously sustains balance and objectivity . . . Beautifully written, absorbing.”
—Jay Freeman, Booklist (starred)

“A panoramic narrative of Jerusalem, organized chronologically and delivered with magisterial flair. Spanning eras from King David to modern Israel with rich anecdotes and vivid detail, this exceptional volume portrays the personalities and worldviews of the dynasties and families that shaped the city throughout its 3,000-year history.”
—Publishers Weekly (starred)

“Jerusalem has been the subject [of] surprisingly few single-authored books aimed at retracing her uniquely varied, long and rich history. Simon Sebag Montefiore, to whom we already owe a debt for his magisterial biography of Stalin, has daringly attempted just that . . . He has both read voraciously, and made excellent use of family archives . . . This reviewer, resident in the Jewish part of Jerusalem, was impressed by Sebag Montefiore’s ability to find the right tone, and to retain a fair approach to Jerusalem’s history . . . A lively book.”
—Guy G. Stroumsa, Times Literary Supplement (UK)

“Totally gripping . . . Montefiore’s history of Jerusalem is a labour of love and scholarship. It is a considerable achievement to have created a sense of pace and variety throughout his 3,000-year narrative. He has a wonderful ear for the absurdities and the adventurers of the past.”
—Barnaby Rogerson, Independent