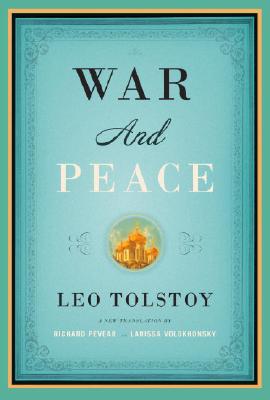 From Richard Pevear and Larissa Volokhonsky, the best-selling, award-winning translators of Anna Karenina and The Brothers Karamazov, comes a brilliant, engaging, and eminently readable translation of Leo Tolstoy’s master epic.

War and Peace centers broadly on Napoleon’s invasion of Russia in 1812 and follows three of the best-known characters in literature: Pierre Bezukhov, the illegitimate son of a count who is fighting for his inheritance and yearning for spiritual fulfillment; Prince Andrei Bolkonsky, who leaves behind his family to fight in the war against Napoleon; and Natasha Rostov, the beautiful young daughter of a nobleman, who intrigues both men. As Napoleon’s army invades, Tolstoy vividly follows characters from diverse backgrounds—peasants and nobility, civilians and soldiers—as they struggle with the problems unique to their era, their history, and their culture. And as the novel progresses, these characters transcend their specificity, becoming some of the most moving—and human—figures in world literature.

Pevear and Volokhonsky have brought us this classic novel in a translation remarkable for its fidelity to Tolstoy’s style and cadence and for its energetic, accessible prose. With stunning grace and precision, this new version of War and Peace is set to become the definitive English edition.

Count Leo Tolstoy (1828-1910) was born in central Russia. After serving in the Crimean War, he retired to his estate and devoted himself to writing, farming, and raising his large family. His novels and outspoken social polemics brought him world fame.

Praise For War and Peace…

“Shimmering....[it] offers an opportunity to see this great classic afresh, to approach it not as a monument but rather as a deeply touching story about our contradictory human hearts.” —Michael Dirda, Washington Post Book World


“Excellent....an extraordinary achievement....wonderfully fresh and readable....The English-speaking world is indebted to these two magnificent translators for revealing more of its hidden riches than any who have tried to translated the book before.” —Orlando Figes, New York Review of Books


“Reading the Pevear-Volokhonsky translation, it is the artistry that leaps out, even on the first page.” —Wall Street Journal


“A major new translation . . . [which] brings us the palpability [of Tolstoy’ s characters] as perhaps never before. . . . Richard Pevear and Larissa Volokhonsky’ s new translation gives us new access to the spirit and order of the book.” —James Wood, The New Yorker