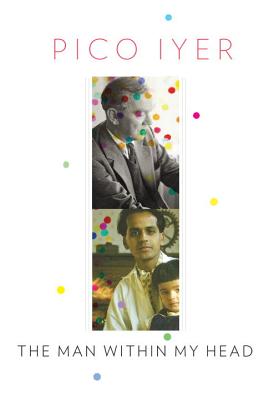 The Man Within My Head

We all carry people inside our heads—actors, leaders, writers, people out of history or fiction, met or unmet, who sometimes seem closer to us than people we know.

In The Man Within My Head, Pico Iyer sets out to unravel the mysterious closeness he has always felt with the English writer Graham Greene; he examines Greene’s obsessions, his elusiveness, his penchant for mystery. Iyer follows Greene’s trail from his first novel, The Man Within, to such later classics as The Quiet American and begins to unpack all he has in common with Greene: an English public school education, a lifelong restlessness and refusal to make a home anywhere, a fascination with the complications of faith. The deeper Iyer plunges into their haunted kinship, the more he begins to wonder whether the man within his head is not Greene but his own father, or perhaps some more shadowy aspect of himself.

Drawing upon experiences across the globe, from Cuba to Bhutan, and moving, as Greene would, from Sri Lanka in war to intimate moments of introspection; trying to make sense of his own past, commuting between the cloisters of a fifteenth-century boarding school and California in the 1960s, one of our most resourceful explorers of crossing cultures gives us his most personal and revelatory book.

Praise For The Man Within My Head…

“Resonates deeply…In the hands of a lesser writer, the dueling father figures would dissolve into melodrama, but Iyer weaves them brilliantly.” –Publishers Weekly

“[Iyer] is a wonderful wordsmith, and he provides engaging stories.” –Kirkus

“It may be that Iyer’s beautifully contoured sentences embody all the landscapes he’s absorbed as he’s traveled the world, pen in hand. Iyer is always present in his celebrated books, but never to the extent he is here in this captivating memoir of an unsought, often unnerving affinity…Iyer’s deep-diving expedition also illuminates the mystery and spirit of the literary imperative: ‘A writer is a palmist, reading the lines of the world.’” –Booklist

“A contemplative, idiosyncratic book, a kind of side trip that diverges from the routes of Iyer’s usual writing…as “The Man Within My Head” demonstrates, there’s fellowship to be found in the community of eloquent strangers, an eternal literary companionship.” –The New York Times Book Review

“A courageous, intriguing book, perhaps better described generically not as a memoir but a confession.” –The New York Review

“As Iyer investigates Greene’s life, he finds more parallels with his own, some superficial and some profound, which Iyer susses out in his usual composed, flowing prose.” –The Daily Beast

“Iyer’s rich and provocative book invites us to see the world in which we find ourselves today in a new and revealing light, and that’s the real measure of his accomplishment. ‘A writer is a palmist, reading the lines of the world,’ Iyer says of Greene, but he could be describing himself just as well.” –JewishJournal.com

“This book is an original, a literary feat, a kind of counter-biography and shadow-autobiography. I can’t think of another quite like it...The Man Within My Head is Iyer’s richest, wisest book to date.” –The Hindu

“Iyer writes admiringly and persuasively about Greene in ways that the novelist may have approved…an engrossing read.” –Commenweal Magazine

Pico Iyer has written nonfiction books on globalism, Japan, the Fourteenth Dalai Lama, and forgotten places, and novels on Revolutionary Cuba and Islamic mysticism. He regularly writes on literature for "The New York Review of Books, "on travel for the "Financial Times, "and on global culture and the news for "Time, The New York Times, "and magazines around the world.
Loading...
or
Not Currently Available for Direct Purchase