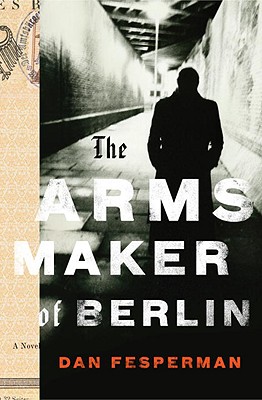 The Arms Maker of Berlin

“This engrossing thriller has it all: a hunt based on ciphers and clues; WWII and the Third Reich; spies, lies, and cover-ups. Beginning with an intrepid professor who must chase down the legacy of an estranged mentor, the story jumps back to the early 1940s and then back again, weaving a complex tale of love, war, and betrayal. Highly recommended.”
— Nancy Fontaine, The Yankee Bookshop, Woodstock, VT
View the List

This powerfully suspenseful new novel from Dan Fesperman takes us deep into the early 1940s in Switzerland and Germany as it traces the long reach of the wartime intrigues of the White Rose student movement, which dared to speak out against Hitler.

When Nat Turnbull, a history professor who specializes in the German resistance, gets the news that his estranged mentor, Gordon Wolfe, has been arrested for possession of stolen World War II archives, he’s hardly surprised that, even at the age of eighty-four, Gordon has gotten himself in trouble. But what’s in the archives is staggering: a spymaster’s trove missing since the end of the war, one that Gordon has always claimed is full of “secrets you can’t find anywhere else . . . live ammunition.”

Yet key documents are still missing, and Nat believes Gordon has hidden them. The FBI agrees, and when Gordon is found dead in jail, the Bureau dispatches Nat to track down the material, which has also piqued the interest of several dangerous competitors. As he follows a trail of cryptic clues left behind by Gordon, assisted by an attractive academic with questionable motives, Nat’s quest takes him to Bern and Berlin, where his path soon crosses that of Kurt Bauer, an aging German arms merchant still hoarding his own wartime secrets. As their stories—and Gordon’s—intersect across half a century, long-buried exploits of deceit, devotion, and doomed resistance begin working their way to the surface. And as the stakes rise, so do the risks . . .

Praise For The Arms Maker of Berlin…

"'Intelligent thriller' is almost an oxymoron . . . Which may be why novels like Dan Fesperman's are so rare . . . Fesperman just can't help drawing on his experience as a journalist covering foreign conflicts. And that experience puts the meat on the intricate bone structure of his thriller plots. You come away from a Fesperman novel not only abuzz with the exhilaration of the chase, but also aware that you've absorbed something of the complexity of the world's conflicts . . . Fesperman's characters in The Arms Maker of Berlin, particularly Bauer, are smartly imagined and subtly drawn."
—San Francisco Chronicle

"A smoothly accelerating thriller . . . Fesperman is a skillful, unpretentious writer who deftly incorporates his extensive knowledge of the period."
— Boston Globe

"Fesperman convincingly evokes the fraying Reich in 1944 . . . Readers who like a bit of history with their thrills will be thoroughly satisfied."
—Publishers Weekly

"Fesperman writes well. His characters are believable, and the strong and credible plot will specially appeal to fans of World War II espionage fiction."
—Library Journal

"This one is definitely not your out-of-the-box spy caper, thus highly recommended . . . In the jaded world of the post-modern spy novel, there are no good guys or bad guys, no black or white—just a thousand shades of gray. This combination of anomie and espionage can get tiresome after awhile, but in Fesperman's newest novel, he spices things up."
—Booklist (starred)

Dan Fesperman's travels as a writer have taken him to thirty countries and three war zones. "Lie in the Dark "won the Crime Writers' Association of Britain's John Creasey Memorial Dagger Award for best first crime novel, "The Small Boat of Great Sorrows" won their Ian Fleming Steel Dagger Award for best thriller, and "The Prisoner of Guantanamo "won the Dashiell Hammett Award from the International Association of Crime Writers. He lives in Baltimore.
or
Not Currently Available for Direct Purchase