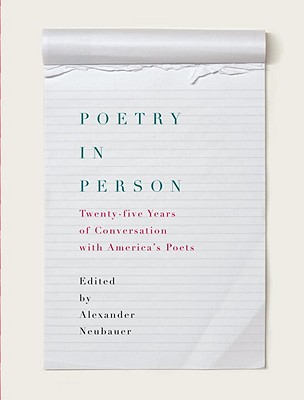 “In the fall of 1970, at the New School in Greenwich Village, a new teacher posted a flyer on the wall,” begins Alexander Neubauer’s introduction to this remarkable book. “It read ‘Meet Poets and Poetry, with Pearl London and Guests.’” Few students responded. No one knew Pearl London, the daughter of M. Lincoln Schuster, cofounder of Simon & Schuster. But the seminar’s first guests turned out to be John Ashbery, Adrienne Rich, and Robert Creely. Soon W. S. Merwin followed, then Mark Strand and Galway Kinnell.

London invited poets to bring their drafts to class, to discuss their work in progress and the details of vision and revision that brought a poem to its final version. From Maxine Kumin in 1973 to Eamon Grennan in 1996, including Amy Clampitt, Marilyn Hacker, Paul Muldoon, Nobel laureate Derek Walcott, and U.S. poet laureates Robert Hass, Robert Pinsky, Louise Glück, and Charles Simic, the book follows an extraordinary range of poets as they create their poems and offers numerous illustrations of the original drafts, which bring their processes to light. With James Merrill, London discusses autobiography and subterfuge; with Galway Kinnell, his influential notion that the new nature poem must include the city and not exclude man; with June Jordan, “Poem in Honor of South African Women” and the question of political poetry and its uses. Published here for the first time, the conversations are intimate, funny, irreverent, and deeply revealing. Many of the drafts under discussion—Robert Hass’s “Meditation at Lagunitas,” Edward Hirsch’s “Wild Gratitude,” Robert Pinsky’s “The Want Bone”—turned into seminal works in the poets’ careers.

There has never been a gathering like Poetry in Person, which brings us a wealth of understanding and unparalleled access to poets and their drafts, unraveling how a great poem is actually made.

Praise For Poetry in Person: Twenty-five Years of Conversation with America's Poets…

“Dazzling . . . One of the best books you will ever read on how poems are actually made . . . [It] invites the most careful study, yet it’s also a book full of gripes and brilliant observations and impassioned arguments.” —The Washington Post Book World

Alexander Neubauer is the author of two previous works of nonfiction, "Conversations on Writing Fiction: Interviews with Thirteen Distinguished Teachers of Fiction Writing in America "and the acclaimed "Nature's Thumbprint: The New Genetics of Personality." His book reviews and essays have appeared in "Time Out New York, Poets & Writers, " and other periodicals. For many years he taught fiction writing at the New School in New York City. Born and raised in Manhattan, he now lives in Cornwall, Connecticut.
Loading...
or
Not Currently Available for Direct Purchase