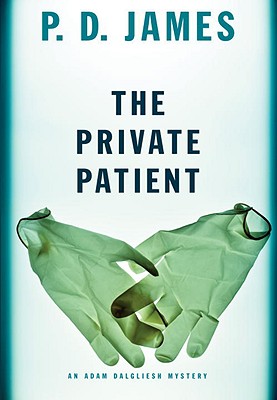 “The scorpion tail of P.D. James' prose has lost none of its sting in this, her 17th novel. The setting is a lovely English manor in Dorset that has been converted to a surgical clinic, and the victim is a well-known investigative journalist who has come to the clinic. The suspects are as deeply complex as any characters James has created, and Commander Dalgleish exposes their motives with a surgical finesse. The Private Patient is intricate, novelistic, and engrossing.”
— Betsy Burton, The King's English, Salt Lake City, UT
View the List

Cheverell Manor is a lovely old house in deepest Dorset, now a private clinic belonging to the famous plastic surgeon George Chandler-Powell. When investigative journalist Rhoda Gradwyn arrived there one late autumn afternoon, scheduled to have a disfiguring and long-standing facial scar removed, she had every expectation of a successful operation and a pleasant week recuperating.

Two days later she was dead, the victim of murder.

To Commander Adam Dalgliesh, who with his team is called in to investigate the case, the mystery at first seems absolute. Few things about it make sense. Yet as the detectives begin probing the lives and backgrounds of those connected with the dead woman—the surgeon, members of the manor staff, close acquaintances—suspects multiply all too rapidly. New confusions arise, including strange historical overtones of madness and a lynching 350 years in the past. Then there is a second murder, and Dalgliesh finds himself confronted by issues even more challenging than innocence or guilt.

P. D. James has gained an enviable reputation for creating detective stories of uncommon depth and intricacy, combined with the sort of humanity and perceptiveness found only in the finest novelists. The Private Patient ranks among her very best.

Praise For The Private Patient…

"No one is better than James at maintaining this tension between the cozy and the frightful." —The Washington Post

"The ghost of literature past haunts P.D. James' newest novel. . . . The novel's pointed descriptions, its gothic settings, and its theme exploring the insidious legacies of family and class violence suggest Charles Dickens may have rested a hand on James' shoulder while she wrote this terrific literary mystery." —Milwaukee Journal Sentinel

"James is in excellent form. . . . [She] offers her readers intelligence, wisdom, dry humor, knowledge both deep and wide-ranging, humanity, compassion, understanding and a wonderful way with words. . . . James is one of Britain's greatest living writers." —St. Louis Post-Dispatch

P. D. James is the author of nineteen previous books, many of which have been adapted for television in the United States; her novel "The Children of Men" became an internationally successful film in 2006. She spent thirty years in various departments of the British Civil Service, including the Police and Criminal Law Departments of the Home Office. She has served as a magistrate and as a governor of the BBC. In 2000 she celebrated her eightieth birthday and published her autobiography, "A Time to Be in Earnest. "The recipient of many prizes and honors, she was created Baroness James of Holland Park in 1991. She lives in London and Oxford.
Loading...
or
Not Currently Available for Direct Purchase