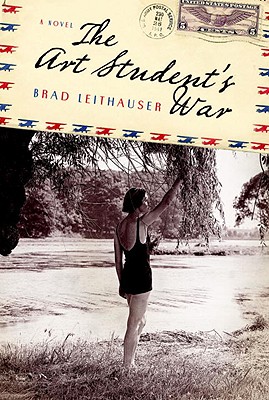 In The Art Student’s War, his sixth novel, Brad Leithauser has brought off a double feat of imagination: a keen and affectionate rendering of an artist as a young woman and a loving historical portrait of a now-vanished Detroit in its heyday.

The story opens on a sunny spring day as a pretty woman, in a crowded wartime city, climbs aboard a streetcar. She is heading home, where another war—a domestic war—is about to erupt.

The year is 1943. Our heroine, Bianca Paradiso, is eighteen and an art student. She goes by Bea with friends and family, but she is Bianca in that world of private ambition where she dreams of creating canvases deserving of space on a museum’s walls. She is determined to observe everything, and there is much to see in a thriving, sleepless city where automobile production has been halted in favor of fighter planes and tanks, and where wounded soldiers have begun to appear with disturbing frequency.

The glorious pursuit of art and the harrowing pursuit of military victory eventually merge when Bea is asked to draw portraits of wounded young soldiers in a local hospital. Suddenly, bewilderingly, she must deal with lives maimed at their outset, and with headlong romantic yearnings that demand more of her than she feels prepared to give. And she must do so at a time when dangerous revelations—emotional detonations—are occurring in her own family.

Rich, humorous, and grippingly written, The Art Student’s War is Leithauser’s finest novel to date—a view both global and intimate in its portrayal of one family caught up in the personal and national drama of the Second World War.

Brad Leithauser was born in Detroit and graduated from Harvard College and Harvard Law School. He is the author of five previous novels, a novel in verse, five volumes of poetry, two collections of light verse, and a book of essays. Among his many awards and honors are a MacArthur Fellowship and, in 2005, the induction by the president of Iceland into the Order of the Falcon for his writings about Nordic literature. He is a professor in the writing seminars at Johns Hopkins University. He and his wife, Mary Jo Salter, divide their time between Baltimore, Maryland, and Amherst, Massachusetts.

Praise For The Art Student's War…

"A sweeping, multilayered and ultimately beautiful story about one woman's search for authenticity, community and passion in a city that once promised so much." —New York Times Book Review

“Leithauser offers a vivid historical portrait of Detroit in its prime as he affectionately chronicles the life of a young female artist.” —Chicago Tribune

“A loving, elegiac caress of a city used to rougher treatment. . . . This playful, erudite and emotional writer travels lightly and far and never in the quite the direction one would have predicted.” —The New York Review of Books

“A homage of depth and texture to the churning wonder that was Detroit in its golden age. . . . A living, breathing vision.” —The Washington Post

“Richly woven . . . sumptuous. . . . Some passages in this latest work beg to be read over and over, so perfect are the form and texture of the words.” —Dallas Morning News

"[Leithauser] replicates a world where such qualities as innocence, decency and optimism thrive and breathe, and he does it less by building an imaginary Nostalgialand of the mind than by guiding us through wartime Detroit. . . . It's not that the world of the book is virginally chaste—it is, after all, a home to war, the wounded, alcoholism, regret, cancer and race riots—but that it's viewed through such stubbornly forgiving and optimistic eyes." —Toronto Star

“A peak achievement. . . . If ever there was one, Leithauser is a triple-threat man as novelist, poet, and critic.” —Commonweal

“Bianca is an altogether charming character. Blessed with the eyes of an artist, she drinks in the visual details of her city, mentally painting all the time. . . . Bianca Paradiso’s city is no paradise and never has been, but it does turn out to be a marvelous art studio—for the art of living.” —Christian Century

“A fresh, captivating coming-of-age story. . . . The novel's portrait of wartime fervor is . . . haunting. . . . Superb portraits of an endearing heroine and a cluster of finely observed secondary characters backlit by history.” —Kirkus Reviews