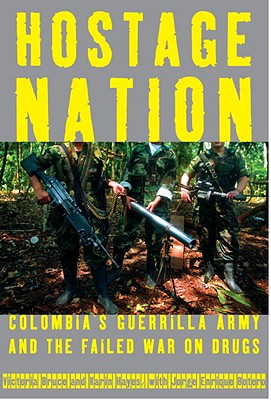 Colombia's Guerrilla Army and the Failed War on Drugs

On July 2, 2008, when three American private contractors and Colombian presidential candidate Ingrid Betancourt were rescued after being held for more than five years by the Revolutionary Armed Forces of Colombia (FARC), the world was captivated by their personal narratives. But between the headlines a major story was lost: Who exactly are the FARC? How had a drug-funded revolutionary army managed to hold so many hostages for so long? Had our costly War on Drugs failed completely? Hostage Nation answers these questions by exploring the complex and corrupt political and socioeconomic situations that enabled the FARC to gain unprecedented strength, influence, and impunity. It takes us behind the news stories to profile a young revolutionary in the making, an elite Colombian banker-turned-guerrilla and the hard-driven American federal prosecutor determined to convict him on American soil, and a former FBI boss who worked tirelessly to end the hostage crisis while the U.S. government disregarded his most important tool—negotiation.

With unprecedented access to the FARC’s hidden camps, exceptional research, and lucid and keen insight, the authors have produced a revelatory work of current history.

Victoria Bruce is the author of "No Apparent""Danger: The True Story of Volcanic Disaster at Galeras and Nevado del Ruiz."

Jorge Enrique Botero is a Colombian journalist and best-selling author. He is the only journalist who ever gained access to the American hostages while they were held by the FARC.