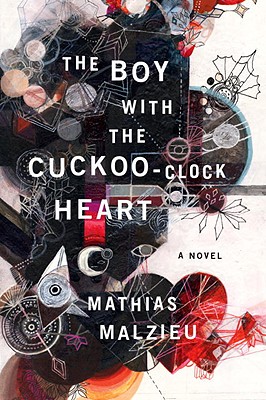 The Boy with the Cuckoo-Clock Heart

FIRSTLY: don’t touch the hands of your cuckoo-clock heart. SECONDLY: master your anger. THIRDLY: never, ever fall in love. For if you do, the hour hand will poke through your skin, your bones will shatter, and your heart will break once more.

Edinburgh, 1874. Born with a frozen heart, Jack is near death when his mother abandons him to the care of Dr. Madeleine—witch doctor, midwife, protector of orphans—who saves Jack by placing a cuckoo clock in his chest. And it is in her orphanage that Jack grows up among tear-filled flasks, eggs containing memories, and a man with a musical spine.

As Jack gets older, Dr. Madeleine warns him that his heart is too fragile for strong emotions: he must never, ever fall in love. And, of course, this is exactly what he does: on his tenth birthday and with head-over-heels abandon. The object of his ardor is Miss Acacia—a bespectacled young street performer with a soul-stirring voice. But now Jack’s life is doubly at risk—his heart is in danger and so is his safety after he injures the school bully in a fight for the affections of the beautiful singer.

Now begins a journey of escape and pursuit, from Edinburgh to Paris to Miss Acacia’s home in Andalusia. Mathias Malzieu’s The Boy with the Cuckoo-Clock Heart is a fantastical, wildly inventive tale of love and heartbreak—by turns poignant and funny—in which Jack finally learns the great joys, and ultimately the greater costs, of owning a fully formed heart.


Praise For The Boy with the Cuckoo-Clock Heart…

“A fantastic voyage . . . A whimsical fairy-tale of a book—for adults . . . It’s like a dark version of Alice in Wonderland or Pinocchio . . . A quick and entertaining read that people who like fantasy-fiction and folk tales will appreciate.”
—Jenny Dial, Houston Chronicle

“The brilliance of this gothic-punk novella, sparkling with imagery filtered through the prism of French film-makers Jeunet and Caro, is in the telling: Malzieu’s prose is distinctly original, spitting and fizzing with unique similes and striking metaphors, wonderfully translated by Sarah Ardizzone.”
—Eric Brown, The Guardian (London)

“Malzieu has a gift for unexpected and strong images.”
—Elle (Paris)

“Malzieu sketches European landscapes and crafts figurative language with irresistible relish . . . Calling to mind a host of cultural touchstones, from Pinocchio to The Wizard of Oz, this kaleidoscopic picaresque will enchant many adults and young people alike.”
—Publishers Weekly

“Malzieu uses vivid metaphors and fantastical inventions to craft a beautifully written tale of love, both maternal and romantic . . . The prose style is simple and fluid, and the setting is not unlike a Tim Burton film—dreamy, dark, and magical—so it’s no surprise that this novel is being adapted into an animated film. For fans of magical realism and fairy tales.”
—Library Journal

“A fairy tale jeu d’esprit, but charming all the same.”
—Metro (UK)

Mathias Malzieu is the lead singer of the French band Dionysos. "The Boy with the Cuckoo-Clock Heart" is the basis for an album that Malzieu wrote, and he is codirector of an animated feature-film adaptation optioned by Luc Besson. This is his third novel and the first to be translated into English. Born in 1974 near Montpelier, Malzieu now lives in Paris.
Loading...
or
Not Currently Available for Direct Purchase