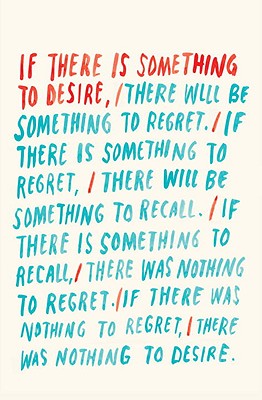 If There is Something to Desire

I broke your heart. / Now barefoot I tread / on shards.

Such is the elegant simplicity—a whole poem in ten words, vibrating with image and emotion—of the best-selling Russian poet Vera Pavlova. The one hundred poems in this book, her first full-length volume in English, all have the same salty immediacy, as if spoken by a woman who feels that, as the title poem concludes, “If there was nothing to regret, / there was nothing to desire.”

Pavlova’s economy and directness make her delightfully accessible to us in all of the widely ranging topics she covers here: love, both sexual and the love that reaches beyond sex; motherhood; the memories of childhood that continue to feed us; our lives as passionate souls abroad in the world and the fullness of experience that entails. Expertly translated by her husband, Steven Seymour, Pavlova’s poems are highly disciplined miniatures, exhorting us without hesitation: “Enough painkilling, heal. / Enough cajoling, command.”

It is a great pleasure to discover a new Russian poet—one who storms our hearts with pure talent and a seemingly effortless gift for shaping poems.

Vera Pavlova was born in Moscow. She is the author of fourteen collections of poetry, four opera librettos, and numerous essays on musicology. Her work has been translated into eighteen languages. She is the recipient of several awards and is one of the best-selling poets in Russia.Steven Seymour is a professional interpreter and translator of Russian, Polish, and French. His English translations of Vera Pavlova's poems have appeared in "Tin House "and "The New Yorker."
Loading...
or
Not Currently Available for Direct Purchase