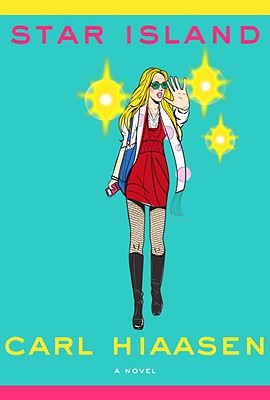 Meet twenty-two-year-old Cherry Pye (née Cheryl Bunterman), a pop star since she was fourteen—and about to attempt a comeback from her latest drug-and-alcohol disaster.

Now meet Cherry again: in the person of her “undercover stunt double,” Ann DeLusia. Ann portrays Cherry whenever the singer is too “indisposed”—meaning wasted—to go out in public. And it is Ann-mistaken-for-Cherry who is kidnapped from a South Beach hotel by obsessed paparazzo Bang Abbott.

Now the challenge for Cherry’s handlers (über–stage mother; horndog record producer; nipped, tucked, and Botoxed twin publicists; weed whacker–wielding bodyguard) is to rescue Ann while keeping her existence a secret from Cherry’s public—and from Cherry herself.

The situation is more complicated than they know. Ann has had a bewitching encounter with Skink—the unhinged former governor of Florida living wild in a mangrove swamp—and now he’s heading for Miami to find her . . .

Will Bang Abbott achieve his fantasy of a lucrative private photo session with Cherry Pye? Will Cherry sober up in time to lip-synch her way through her concert tour? Will Skink track down Ann DeLusia before Cherry’s motley posse does?

All will be revealed in this hilarious spin on life in the celebrity fast lane.

“Carl Hiaasen [is] Florida’s most entertainingly indignant social critic . . . He presents us with Cherry Pye, a 22-year-old pop star whose every display of narcissistic excess will send a frisson of horrified delight up your spine . . . The outlandish events soar on the exuberance of Hiaasen’s manic style, a canny blend of lunatic farce and savage satire.”
—New York Times Book Review

“Does anyone remember what we did for fun before novelist Carl Hiaasen began turning out his satirical comedies one after another after another? . . . Star Island is a concoction worth the time of any reader who wants quality entertainment.”
—San Francisco Chronicle

“Fans of Carl Hiaasen will feel right at home when they plunge into Star Island. There’s the familiar collection of deliciously tawdry characters, each angling for a piece of the action in Florida . . . And there’s the fast-moving plot, and the writing that makes you laugh out loud . . . Hiaasen has turned out another gem. Readers of his previous novels can settle in for more wacky fun in the Florida sun.”
—Associated Press

“Hiaasen is at his gleeful best skewering the morally bankrupt. He has plenty to poke fun at here, from a reprehensible real-estate developer with an excruciating groin injury to twin publicists Botoxed within an inch of their lives. This is classic Hiaasen—demented, hilarious, and utterly over the top.”
—Booklist (starred)

Carl Hiaasen was born and raised in Florida. He is the author of eleven previous novels, including the best-selling Nature Girl, Skinny Dip, Sick Puppy, and Lucky You, and three best-selling children’s books, Hoot, Flush, and Scat. His most recent work of nonfiction is The Downhill Lie: A Hacker’s Return to a Ruinous Sport. He also writes a weekly column for The Miami Herald.