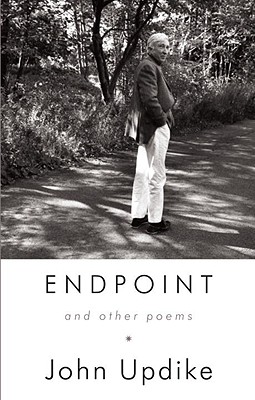 Endpoint and Other Poems

A stunning collection of poems that John Updike wrote during the last seven years of his life and put together only weeks before he died for this, his final book.

The opening sequence, “Endpoint,” is made up of a series of connected poems written on the occasions of his recent birthdays and culminates in his confrontation with his final illness. He looks back on the boy that he was, on the family, the small town, the people, and the circumstances that fed his love of writing, and he finds endless delight and solace in “turning the oddities of life into words.”

“Other Poems” range from the fanciful (what would it be like to be a stolen Rembrandt painting? he muses) to the celebratory, capturing the flux of life. A section of sonnets follows, some inspired by travels to distant lands, others celebrating the idiosyncrasies of nature in his own backyard.

For John Updike, the writing of poetry was always a special joy, and this final collection is an eloquent and moving testament to the life of this extraordinary writer.

John Updike was born in 1932, in Shillington, Pennsylvania. He graduated from Harvard College in 1954, and spent a year in Oxford, England, at the Ruskin School of Drawing and Fine Art. From 1955 to 1957 he was a member of the staff of The New Yorker. He was the father of four children and the author of more than sixty books, including novels and collections of short stories, poems, and criticism. His books won the Pulitzer Prize, the National Book Award, the American Book Award, the National Book Critics Circle Award, the PEN/Faulkner Award, and the Howells Medal, among other honors. He died in January 2009.
Loading...
or
Not Currently Available for Direct Purchase