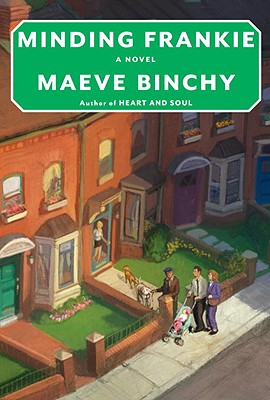 Maeve Binchy is back with a tale of joy, heartbreak and hope, about a motherless girl collectively raised by a close-knit Dublin community.

When Noel learns that his terminally ill former flame is pregnant with his child, he agrees to take guardianship of the baby girl once she’s born. But as a single father battling demons of his own, Noel can’t do it alone.

Fortunately, he has a competent, caring network of friends, family and neighbors: Lisa, his unlucky-in-love classmate, who moves in with him to help him care for little Frankie around the clock; his American cousin, Emily, always there with a pep talk; the newly retired Dr. Hat, with more time on his hands than he knows what to do with; Dr. Declan and Fiona and their baby son, Frankie’s first friend; and many eager babysitters, including old friends Signora and Aidan and Frankie’s doting grandparents, Josie and Charles.

But not everyone is pleased with the unconventional arrangement, especially a nosy social worker, Moira, who is convinced that Frankie would be better off in a foster home. Now it’s up to Noel to persuade her that everyone in town has something special to offer when it comes to minding Frankie.

Maeve Binchy is the author of numerous best-selling books, including her most recent novel, " Heart and Soul, " in addition to "Whitethorn Woods, ""Nights of Rain and Stars, ""Quentins, ""Scarlet Feather, ""Circle of Friends" and "Tara Road, " which was an Oprah's Book Club selection. She has written for "Gourmet;""O, The Oprah Magazine;""Modern Maturity;" and "Good Housekeeping," among other publications. She and her husband, Gordon Snell, live in Dalkey, Ireland.

“One of Binchy’s best works. She harmoniously handles a diverse group of characters, the good deeds that characterize life in Ireland are believable, and the ending is sweet. One hopes to find Frankie in one of Binchy’s future novels.” —Susan Rogers, Newark Star-Ledger

“Binchy’s world view is a large, benevolent one, and the reader is happier for it . . . bless her big Irish heart.” —Laurie Hertzel, Minneapolis Star-Tribune

“Maeve Binchy has done it again [with] yet another warm tale of individual growth and human community, [in which] she assembles a large cast of characters and deploys them with her characteristic playfulness . . . Binchy specializes in exploring human foibles without spelling them out in tiresome detail . . . There’s a good chance that many readers, like this one, will consider Minding Frankie one of Binchy’s best novels yet.” —Maude McDaniel, BookPage

“All across America, Maeve Binchy fans will be kicking off their shoes, making a nice cup of tea, and curling up on the couch as they re-enter Binchy’s cozy world. The Irish author returns here to a charming Dublin milieu of favorite characters from past novels, with some important new ones.” —Melinda Bargreen, The Seattle Times

“Binchy is a national treasure in her homeland of Ireland, and her latest novel is a perfect illustration of why.…Your heart will have no trouble recognizing the landscape [of this] touching saga.” —Publishers Weekly

“Reading a Maeve Binchy novel is like settling in for a cozy visit with an old friend.  In vintage Binchy style, a cast of colorfully eccentric characters living in a snug Dublin neighborhood seamlessly weave in and out of each other’s lives, united by family, faith, friendship and community....Readers will need a box of tissues handy as the good-hearted residents of St. Jarlath’s Crescent prove that it does indeed take a ‘village to raise a child.’” —Margaret Flanagan, Booklist