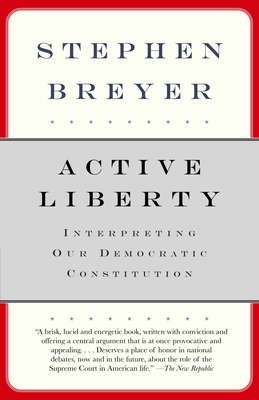 A brilliant new approach to the Constitution and courts of the United States by Supreme Court Justice Stephen Breyer.For Justice Breyer, the Constitution’s primary role is to preserve and encourage what he calls “active liberty”: citizen participation in shaping government and its laws. As this book argues, promoting active liberty requires judicial modesty and deference to Congress; it also means recognizing the changing needs and demands of the populace. Indeed, the Constitution’s lasting brilliance is that its principles may be adapted to cope with unanticipated situations, and Breyer makes a powerful case against treating it as a static guide intended for a world that is dead and gone. Using contemporary examples from federalism to privacy to affirmative action, this is a vital contribution to the ongoing debate over the role and power of our courts.

Stephen Breyer is a Justice of the Supreme Court of the United States. He is a resident of Cambridge, Massachusetts, and Washington, D.C.

“A brisk, lucid and energetic book, written with conviction and offering a central argument that is at once provocative and appealing. . . . Deserves a place of honor in national debates, now and in the future, about the role of the Supreme Court in American life.” –The New Republic“An important contribution. Active Liberty serves to clarify the stakes in contemporary disputes over the courts, rightly emphasizing areas of common ground alongside those of controversy.”–The Washington Post Book World“Provocative and well-argued.. . . . What we need more of, Active Liberty insists, is not activist judges but activist citizens.” –The New York Times“Active Liberty will likely influence not only public debate but also how lawyers craft their cases.” –The Wall Street Journal
or
Buy Here
Copyright © 2020 American Booksellers Association