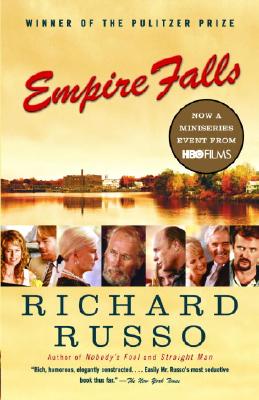 With Empire Falls" "Richard Russo cements his reputation as one of America' s most compelling and compassionate storytellers.
Miles Roby has been slinging burgers at the Empire Grill for 20 years, a job that cost him his college education and much of his self-respect. What keeps him there? It could be his bright, sensitive daughter Tick, who needs all his help surviving the local high school. Or maybe it' s Janine, Miles' soon-to-be ex-wife, who' s taken up with a noxiously vain health-club proprietor. Or perhaps it' s the imperious Francine Whiting, who owns everything in town- and seems to believe that " everything" includes Miles himself. In Empire Falls" "Richard Russo delves deep into the blue-collar heart of America in a work that overflows with hilarity, heartache, and grace.