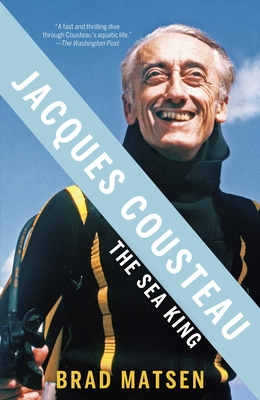 An unprecedented and masterfully told biography of Jacques Cousteau that reveals for the first time the fascinating and compelling individual behind this famous television personality.

Inventor of the aqualung and fearless scuba diver, Jacques Cousteau opened up the ocean to a mass audience for the first time. Here, with the cooperation of many of the subjects closest confidants and family, Brad Matsen makes clear the full picture of his remarkable life, showing the father, military man, inventor, entrepreneur, and adventurer behind the public face. Vividly conveying the people, the science, and the lure of the sea that shaped Cousteau's life, Matsen paints a luminous portrait of a man who profoundly changed the way we live on our planet.

BRAD MATSEN is the author of Titanic’s Last Secrets, Descent: The Heroic Discovery of the Abyss, and many other books about the sea and its inhabitants. He was a creative producer for the television series The Shape of Life, and his articles on marine science and the environment have appeared in Mother Jones, Audubon, and Natural History, among other publications. He lives on Vashon Island, off the coast of Washington State.

“Matsen's book is eloquently crafted by a man who clearly understands and respects the wonders of the sea.” -- Winston-Salem Journal

“Absolutely do not miss this book. It is both entertaining and an important slice of history.”--Diver Magazine

“Cousteau owned one of the most recognizable faces on the planet. . . . Yet, as Matsen deftly demonstrates, we hardly knew him.” —Seattle Times

“There are a lot of Cousteau books – bits and pieces – and many are nonsense. This one is remarkably accurate.”--Jean-Michel Cousteau

“Brad Matsen reminds us that Cousteau earned his fame honestly: He invented the modern understanding of the sea.”—Outside Magazine

“Matsen examines Cousteau with a sensitive eye, qualifying his astounding career and lasting legacy. . . . Environmentalists, divers, and armchair ocean lovers will all soak up this work.”—Publishers Weekly

“Goes beyond the sea. . . . fills us in on Cousteau’s work with the French Resistance during World War II. It also tells of family tragedy and drama.”—NY Post


“Readers who dive, who are interested in ecology or the oceans, or who simply recognize the name Cousteau, will want to read this full, well-rounded portrait of one of the world's greatest explorers and conservationists.”--Library Journal (Starred Review)
or support indie stores by buying on
(This book is on backorder)
Copyright © 2020 American Booksellers Association